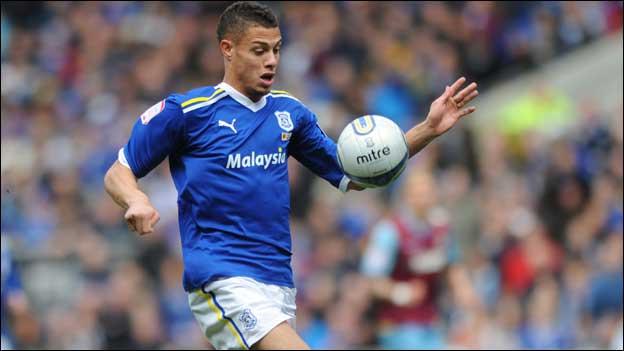 Rudy Gestede is a fresh injury concern for Cardiff City as the Welsh team prepare for a hectic month in their Championship play-off push.

The 23-year-old French striker limped off in the 33rd minute in their 2-0 defeat to West Ham United on Sunday with a suspected hamstring injury.

Gestede was replaced by on-loan Haris Vuckic and he joins midfielder Stephen McPhail on the Bluebirds injury list.

"We'll have to see what the extend of the damage is," said boss Malky Mackay.

"He ran for 120 minutes in the Carling Cup final last Sunday and it did look like a hamstring injury."

Cardiff's fourth loss in five league games against West Ham was their first of eight games in 27 days.

Mackay has bolstered Cardiff's attacking options by the loan signings of teenager Vuckic from Premier League Newcastle United and from financially-troubled Portsmouth.

Gestede has scored three goals in 25 games in his first season in the English league but the former French youth international has been applauded for his ability of leading Cardiff's front-line alongside Kenny Miller.

Scottish international Miller and young Joe Mason are available to Mackay while Cardiff do have Rob Earnshaw in their squad although the experienced Wales international striker has not played in the Championship since 22 October despite being fit.

Vuckic, Lawrence and Championship player of the season contender Peter Whittingham are attacking midfielders that could supplement the Bluebirds front line if required.

McPhail, meanwhile, has turned to doctors to help control the onset of his Sjogren's Syndrome as the experienced former Republic of Ireland international has missed Cardiff's last six matches.