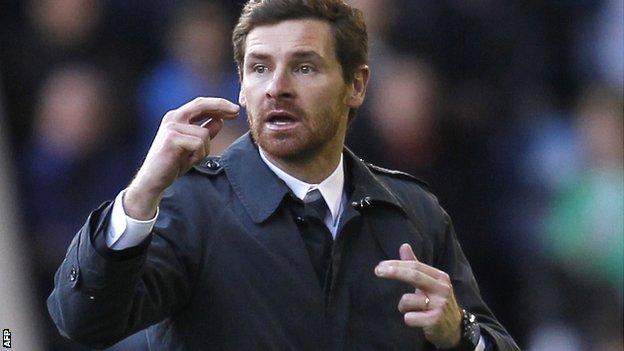 Andre Villas-Boas has been sacked by Chelsea after less than a year in charge at Stamford Bridge.

Chelsea's decision comes on the back of Saturday's 1-0 defeat by West Bromwich Albion and a run of just three Premier League wins in their last 12 games.

The 34-year-old Portuguese only took over as manager in June 2011.

Former Chelsea midfielder Roberto di Matteo has been put in charge as first-team coach on an interim basis until the end of the season.

A statement on the club's website read: "Unfortunately the results and performances of the team have not been good enough and were showing no signs of improving at a key time in the season.

"The club is still competing in the latter stages of the UEFA Champions League and the FA Cup, as well as challenging for a top-four spot in the Premier League, and we aim to remain as competitive as possible on all fronts.

"With that in mind, we felt our only option was to make a change at this time."

Chelsea are facing two tough games in the FA Cup and Champions League over the next 10 days.

They visit Championship side Birmingham for an FA Cup fifth-round replay on Tuesday and the following week they must overturn a 3-1 deficit against Italian side Napoli at Stamford Bridge to avoid exiting the Champions League at the last 16 stage.

Villas-Boas first came to Chelsea as a scout from 2004-2007 during Jose Mourinho's tenure, and five major domestic trophies were won in that period.

He also assisted Mourinho at Porto and Inter Milan, and worked in a similar role under Sir Bobby Robson during the former England manager's spell in charge of Porto.

His first club managerial role was with Portuguese side Academica in October 2009, but after moving to Porto the following summer he won the Portuguese League and Cup double plus the Europa League.

Since Abramovich bought Chelsea in 2003, the club has captured three Premier League titles, three FA Cups and two League Cups but have not won a trophy since Carlo Ancelloti led them to the League and FA Cup double for the first time in their history in 2010.

After being recruited by Chelsea boss Roman Abramovich in what was thought to be an attempt to implement a more attractive style of play, Villas-Boas suffered early defeats against Manchester United and Arsenal and questions were raised about his tactical strategies.

Villas-Boas also appeared to have a difficult working relationship with senior players at Chelsea, several of whom were only slightly younger than him.

Nicolas Anelka, 32, and experienced defender Alex and after Frank Lampard, 33, was left out of the team he said playing under Villas-Boas had

Villas-Boas that the Blues could no longer win the Premier League after they were left 11 points adrift of the leaders following a on Boxing Day.

After at the Hawthorns he said: "It's not been good enough for some time. We're fifth and if that is the case, something's wrong. Every defeat piles more pressure on any Chelsea manager. We don't win enough and that does not make us proud."

Di Matteo, 41, played for Chelsea from 1996-2002 and won two FA Cups, scoring inside 42 seconds in the 1997 final against Middlesbrough, the fastest goal in a final at the old Wembley.

His managerial career began at Milton Keynes Dons in 2008 and he guided them to the League One play-offs in his first season, losing to Scunthorpe on penalties in the semi-finals.

Having moved to West Brom he secured promotion to the Premier League in his first season as the Baggies finished runners-up to Newcastle but his team were thrashed 6-0 in their first match in the top flight, coincidentally at Chelsea, and he was sacked in February 2011.

Four months later Di Matteo was before their partnership was ended, in another ironic twist, following defeat at the Italian's former club.