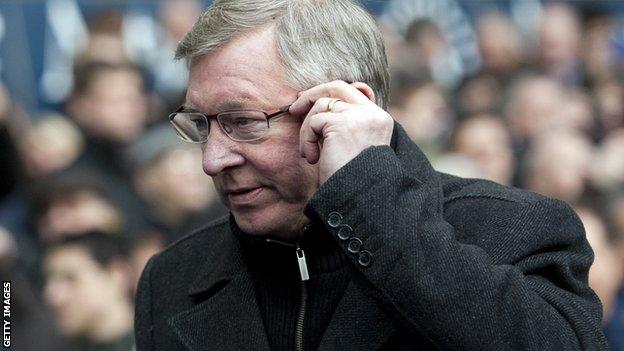 Sir Alex Ferguson believes Manchester United are well placed to win the title after emerging unscathed from a tough run of games.

United moved back to within two points of leaders Manchester City after a clinical 3-1 victory over third-placed Tottenham at White Hart Lane on Sunday.

Ferguson said the win showed his side were "up for the challenge".

"We know exactly what we've got to do. We won't be nervous," added the United manager.

With the exception of the trip to City on 30 April, a game which increasingly looks like being a title decider, the Old Trafford club's remaining 11 league matches are against teams in mid-table or below.

After seeing a Wayne Rooney goal and two from Ashley Young earn United a third straight league win, Ferguson added: "There's only two points difference [to leaders City] and we've been in this situation before.

"We have players coming back from injury. Anderson is back, Tom Cleverley is coming back and Chris Smalling will be back on Thursday.

"Today's performance tells you we're up for it."

Ferguson admitted United had been forced to fight back from a poor start to beat Tottenham.

"It was a great performance by Tottenham and maybe we got our tactics wrong in the first half," commented Ferguson. "In the second half we improved. We told them at half-time to get pushed up on their back four and not let them build up their play.

"After the second goal we played very well.

"We had a bit of luck, and we scored right on half-time with our first shot on goal."

Of a run that has seen United face Arsenal, Chelsea, Liverpool and Spurs in recent weeks, Ferguson added: "We've played all the big teams since January. It was a really busy spell and we've come through that and played well in most of the games.

"We showed a determination to get the result and [goalkeeper David De Gea] made a fantastic save in the second half.

"Tottenham are a very good team and this is only their second defeat at home this season. It was a massive result and a massive performance from our defenders."

Meanwhile, Tottenham manager Harry Redknapp insisted the mood was upbeat despite defeat as the London club look to secure a top-three finish.

"We had a meeting on Friday and I said they [the players] had been a credit all season. We've been on an incredible run and just had a blip last weekend against Arsenal," he added.