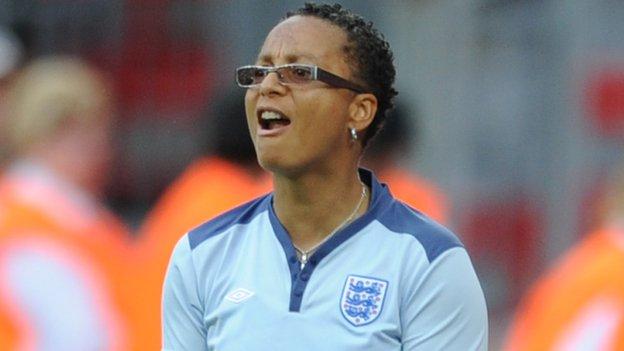 England went down 3-0 to bogey team France in their final group game at the Cyprus Cup in Limassol and now face Italy in Tuesday's third-place final.

The French goals in their latest win came from Louise Necib, Marie-Laure Delie and Gaetane Thiney.

It is now 12 games - and almost 38 years - since England's last victory over Les Bleues.

We improved in the second half, but the scoreline didn't flatter France and it's been a good lesson for us

After Necib had volleyed in the 19th-minute opener, England midfielder Jill Scott wasted a good chance to equalise.

But, six minutes into the second half, goalkeeper Karen Bardsley allowed a Delie header to slip through her legs for the second goal.

And, eight minutes from time, Thiney shot home to complete England's biggest defeat since the 6-2 loss to Germany in the Euro 2009 final.

"France were the better side and deserved their win," said a disappointed Powell. "We couldn't seem to settle and there were too many unforced errors.

"We improved in the second half, but the scoreline didn't flatter France and it's been a good lesson for us."

France will play Canada, who England beat in the 2009 final, to decide the winners of the tournament.

The final will be played immediately after England's meeting with Italy.

"That's going to be another tough game for us," added Powell.

"We've had some close encounters with Italy over the years and this one is likely to be no different."

Italy went through to the third-place final with a 2-1 victory over Scotland, whose defeat meant that they finished bottom of Group B.

Northern Ireland finished bottom of Group C, with no points from their three games following a 2-0 defeat by South Africa.