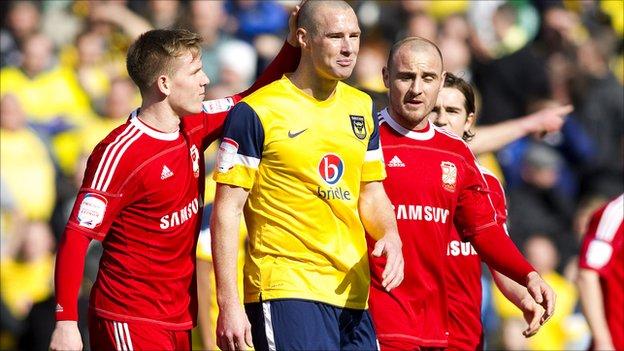 Oxford United have confirmed they will not be appealing against the red card received by striker James Constable in Saturday's derby win over Swindon.

Constable, 27, was dismissed for an alleged elbow on Swindon's Joe Devera in the 10th minute of Saturday's game.

He will now serve a three-match suspension starting with Tuesday's visit to former club Shrewsbury Town.

"You could say it was a red card. The boy has got hold of James and he has swung round," Wilder told BBC Oxford.

The U's went on to win 2-0 despite being down to 10 men for much of the game and Wilder added he was disappointed by the behaviour of Swindon's players after the incident.

"I wasn't too pleased with the reaction of the opposition players running 50 or 60 yards to get involved," he said.

Constable himself was also unimpressed by the behaviour of Devera during the incident, criticising the player on social networking site Twitter.

"Just wondering would players chuck themselves to the ground & roll around like they've been shot, if there was a 3 game ban for simulation??," Constable wrote on Twitter.

As well as Shrewsbury, Constable will miss games against Bradford and Rotherham.