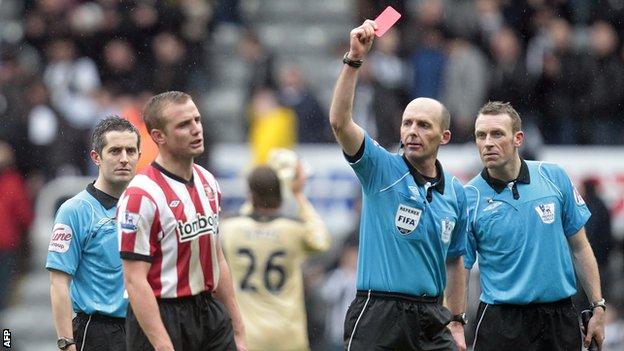 Sunderland captain Lee Cattermole has been suspended for four games and Stephane Sessegnon three after they were sent off against Newcastle United.

Cattermole, 23, was booked for the 10th time this season in the first minute of the match and incurred a two-match ban.

This was doubled after the final whistle when he picked up a straight red card for foul and abusive language towards the match officials.

Midfielder Sessegnon was instantly dismissed after he elbowed Cheik Tiote.

Cattermole became the first of eight players booked by referee Mike Dean in the 1-1 draw on Sunday when he scythed down Tiote after just 40 seconds.

As well as the two players, Newcastle's goalkeeping coach Andy Woodman was also sent to the stands at half-time.

The Sunderland duo will both miss the FA Cup quarter-final trip to Everton and the league games against Liverpool and Blackburn Rovers that follow the tie.

Cattermole will also sit out the home clash with Queens Park Rangers on 24 March.

The weekend's events were the latest in a long line of disciplinary problems for the ex-Middlesbrough and Wigan Athletic defensive midfielder.

He has already been sent off six times since making his Premier League debut in 2006 and was warned his aggression could blight his career by former Sunderland manager Steve Bruce in September 2010 after his second red card in four games.