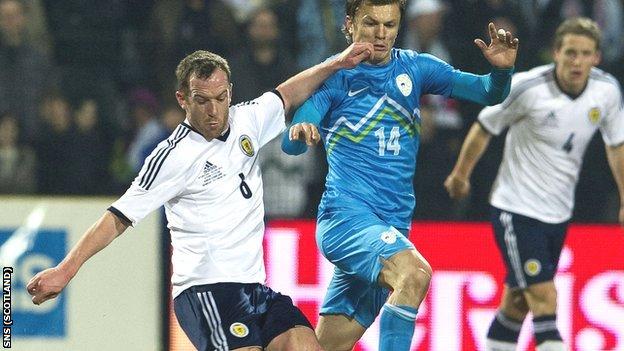 Scotland have arranged a summer friendly against Australia at Easter Road, their final game before September's 2014 World Cup qualifiers.

Craig Levein's side will take on the Socceroos, ranked 22nd by Fifa, in Edinburgh on Wednesday 15 August.

"The match against Australia will be our first on home soil this year," said Levein, whose team will also travel to Luxembourg for a friendly in November.

"It comes before two qualifiers against Serbia and Macedonia at Hampden."

The match against Luxembourg will take place in the Stade Jose Barthel on Wednesday 14 November.

The kick-off times for the friendly matches have yet to be decided.

Before those, Scotland will play the United States in Florida on 26 May.

Levein, whose team drew 1-1 in Slovenia last week, added: "I'm delighted to finalise our full schedule of matches for 2012.

"Just last year Australia defeated another of our Group A opponents, Wales, in Cardiff, and have been in good form in their own qualifiers, so I have no doubt that they will provide us with a tough test.

"We're all excited about the opportunity to play in front of a home crowd at Easter Road, after two important away fixtures.

"We then hope to round off a positive year on a high note with another away friendly in Luxembourg.

"I'm sure that many of our supporters will relish the opportunity to visit the country for the first time in 25 years, and we're all looking forward to the same fantastic backing that we received in Slovenia last week."

In addition to Serbia, Macedonia and Wales, Scotland's other World Cup qualifying opponents are Croatia and Belgium.

Scotland first played Australia 27 years ago, in a qualification play-off for the 1986 World Cup, with Sir Alex Ferguson taking charge of the team following the death of manager Jock Stein during the final qualifier against Wales.

Davie Cooper and Frank McAvennie scored for Scotland in a 2-0 win at Hampden in November 1985, while a 0-0 draw in Melbourne the following month sent the team on their way to the World Cup finals in Mexico.

The two sides have since met in two friendly matches at Hampden.

Ally McCoist got the winning goal in a 1-0 victory in March 1996, while Brett Emerton and David Zdrilic sealed a 2-0 win for Australia four years later.