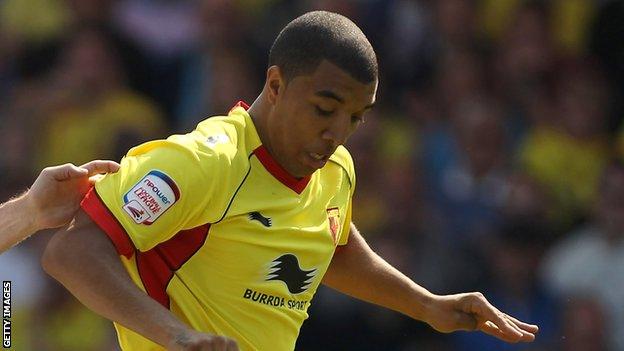 The 23-year-old, who had five goals for the Hornets before January, scored his third in his last five games to secure Saturday's 3-2 win over Burnley.

"His record suggests he hasn't scored as freely as what we'd hoped or what he'd hoped," Dyche told BBC Three Counties Radio.

"But now he's correcting that. And it was a very important goal."

They have not performed the feat at Vicarage Road since October 1993, when a Gary Porter hat-trick helped secure a 4-3 win over Bolton after being 3-0 down.

Deeney arrived at Vicarage Road in the summer of 2010 from Walsall, where he netted 27 times in 128 league games.

And after finding the net just three times in 40 appearances last season, the forward has gone on to double that tally this term with 12 Championship fixtures remaining.

"He's an honest guy. He's good around the group and I'm really pleased for him," added Dyche.

"As a striker you've got to score some of those that drop into the box.

"His performance in general was very good. Hustle and bustle - he was a handful and he nicked himself a nice goal."

Deeney's 75th-minute strike completed a dramatic turnaround from two goals down for Watford.

The half-time introduction of who supplied the Hornets' equaliser, helped swing the game in Dyche's favour.

"Alex has been learning as he goes. He's had a few little ups and downs so we just thought we'd take him out and give him a break from it," said the Watford manager.

"We knew he could affect the game and I'm pleased to say once we put him on he did have an affect."

The 20-year-old Swede, who will be at Vicarage Road until the end of the season, added: "Coming off the bench and scoring my first goal was a great feeling.

"I'm a winger and I want to get on the ball and create stuff.

"Next week we play West Ham. That's going to be a tough game. If we can build on this performance, I'm telling you we can win that game."