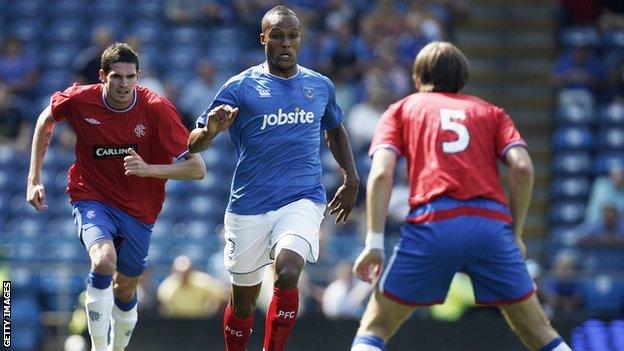 The administrators of Portsmouth and Rangers are in talks about a friendly match to raise funds for the two financially troubled clubs.

The Scottish champions went into administration on 14 February, with Pompey following them into bankruptcy protection three days later.

Both parties are now looking at costs and logistics to see if it could work.

Portsmouth have 13 games left in the Championship, with their last game scheduled for 28 April at Nottingham Forest, while Rangers do not finish their Scottish Premier League campaign until 12/13 May, despite having four games fewer to play.

The Glasgow giants are already holding one fundraising match at Ibrox on 30 March, a 'legends' game against an AC Milan XI that was initially supposed to benefit the teams' charitable foundations but will now direct some much-needed cash to the club's coffers.

"Rangers are not in administration now because of the reckoning that is coming for their alleged abuse of tax avoidance schemes going back to 2001.

They are in the mire now because they have been using 'the bank of HMRC' to fund the club's activities since May."

Read the rest of Matt Slater's blog on Rangers

Rangers' administrators announced last week that there was a £4.5m funding shortfall to see the club through to the summer and savings of £1m a month were needed. An announcement about job cuts is imminent.

And Pompey administrator Birch has issued two warnings that the club might not even be able to fulfil its fixtures this season, such is the crisis at Fratton Park.

The two sides last played each other in a pre-season friendly in 2009, with Portsmouth winning 2-0 on the south coast, but the mood was very different then.

The hosts were about to start their sixth season in the lucrative Premier League, having won the FA Cup only a year earlier, and Rangers were preparing for what would be a successful defence of their SPL crown.

The collapse at Pompey has been dramatic since then, however, with this being a second bout of administration in two years and the club is now on the brink of relegation to the third tier.

Rangers' financial problems are more recent - or have only come to light more recently - but they are of a greater magnitude.

Given the very real risk of liquidation at both clubs, every opportunity to raise funds is being explored but there are significant obstacles to organising a friendly between the teams, not least the costs associated with transport and security.

That said there are other considerations at play, including the PR benefits of staging a high-profile friendly, something that could be very useful to administrators trying to drum up interest from potential buyers.

And fans of both clubs might draw some comfort from knowing they are not alone in their time of despair and uncertainty.