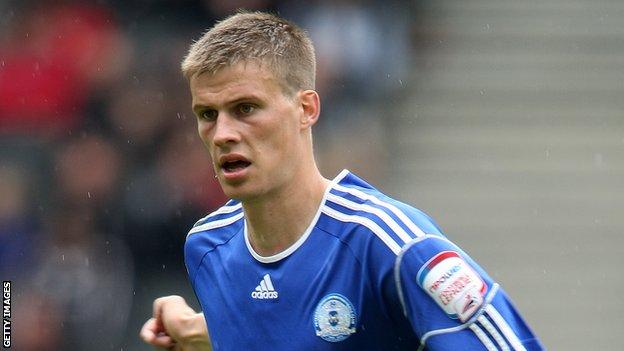 Peterborough United boss Darren Ferguson has admitted his frustration at not being able to keep defender Ryan Bennett until the end of the season.

The 21-year-old but was loaned back to Posh throughout February.

Ferguson believes the centre-half could easily have stayed until May.

"I'm not in charge of those kind of things. I'm just saying it would have been the perfect thing for us to keep him," he told BBC Radio Cambridgeshire.

"It will be interesting to see how many games he plays for Norwich before the end of the season.

"But they were adamant that they wanted him [earlier]."

The Canaries currently have five fit central defenders and England Under-21 international Bennett was an unused substitute for Saturday's 1-0 loss at Stoke.

In contrast, Posh's only recognised performers in that position are Shaun Brisley and Gabby Zakuani, who is playing with a broken toe.

"In an ideal world we should have kept Bennett until the end of the season," Ferguson continued.

"The deal's been done and we only got him back for a month so we have to get on with it and try and get somebody else in."

The Scot has been trying to bolster his back line with a loan signing and, while it is doubtful a deal will be done before Tuesday's visit of Millwall, he hopes to unveil a new arrival later in the week.

"I'm happy to go with what I've got and maybe try and do something for the weekend," he said.

"There's two or three on the list that we can't just get over the line."