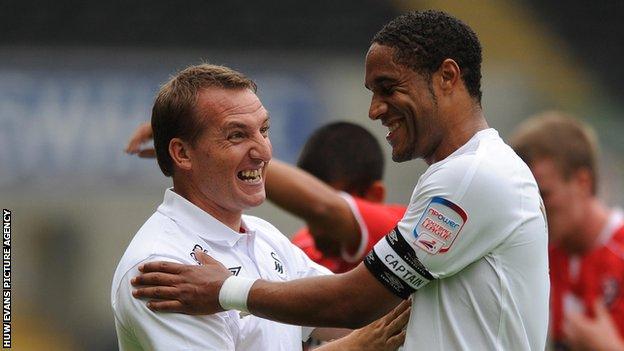 Swansea City's Ashley Williams says he would be delighted for his manager Brendan Rodgers if he went on to a big Premier League club.

Rogers has signed a three-year deal at the Liberty Stadium, but has been linked with the Chelsea job.

The Northern Irishman has guided the Swans close to Premier League safety against all the odds this season.

"I'd be over the moon if he went to one of the big boys. I think he deserves it," Williams told BBC Wales Sport.

"But we are obviously happy to have him and we don't want to see him go.

"He's been mentioned with all sorts [of clubs]. It just shows how well he has done for us. He just gets on with his job. There's no drama attached to him.

"He just keeps his head down and does the job and that's what we try and do."

Rodgers' side are currently lying in 14th place in their first season in the Premier League, 11 points above QPR in 16th.

The Northern Irishman guided the Swans to promotion in his first season and a string of impressive top-flight displays have followed.

And former Chelsea winger Pat Nevin has told BBC Wales Sport that Rodgers should be a leading contender to be the new manager at Stamford Bridge.

"The core of what Roman Abramovich wants to see is Barcelona playing in blue at Stamford Bridge," he said.

"If there's any manager able to bring that sort of style you'd have to say it was Brendan Rodgers.

"He's fantastic and I think he should be considered but I think the higher echelons of Chelsea are looking at hyperstars."

Despite the Swans' relatively healthy position and their 2-0 win at Wigan Athletic, Williams warns the threat of relegation is far from over, especially with leaders Manchester City coming to the Liberty on Sunday followed by a trip to eighth-placed Fulham.

"It's definitely not over. We are not trying to think like that," added the Swansea captain, who has played every minute of every Swansea game this season.

"We have got a massive game coming up on Sunday [against Leaders Manchester City]. The earlier we can be mathematically safe the better and that's what we have got to head towards.

"I'm not sure [how many more wins we need]. That's the big question everyone is asking.

"We are just going to have to wait and see and get as many as we can. The gaffer [Rodgers] always keeps on reminding us to look ahead and not look behind and not worry about what's on down there [in the relegation zone]."

Last time Swansea played Manchester City was in their first game in the top flight. Though they had plenty of possession, the Welsh club went down 4-0.

Williams, though, believes it will be a different return game at the Liberty Stadium.

"We like playing at home and I'm sure it will be an entertaining game," he said. "We have no fear and we believe we can play against anyone at the moment.

"I think we got a bit tired and their quality showed through in the end.

"I think we are a lot more sure of ourselves but on the flip side I think they are a better team than the first day of the season."