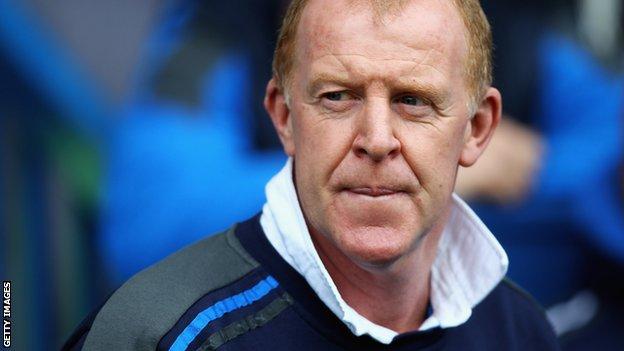 Sacked Sheffield Wednesday boss Gary Megson wants to go back and finish what he started at Hillsborough.

Megson left last week with his team third in League One - just three days after the Owls had ended a poor run to see off promotion rivals Sheffield United in the Steel City derby.

But the 52-year-old told BBC Sport: "I have no bitterness towards Sheffield Wednesday and there never will be.

"One day I'd love to go back and finish what I started."

Megson added: "Wednesday are in great shape. And it would be sweet to see them go up.

If people look at the facts and look at my record, I don't have anything to worry about. Nearly every job I've been given has been at a team in the bottom three. But, if you were no good at it, you wouldn't get past two clubs

"But Wednesday being promoted from division one would be the beginning of something, not the end of something.

"If Wednesday are in the Premier League and down in the bottom six, that's still not big enough.

"A club like Sheffield Wednesday should be in the top half of the Premier League to go in conjunction with the support it's got and the stadium it's got."

Boyhood Owls fan Megson, whose father Don also played for Wednesday in the 1960s, had two separate spells at Hillsborough as a player and admits that when he was brought in to replace Alan Irvine 13 months ago, it was simply the fulfilment of a long-held ambition.

"I knew what there was in terms of support and the size and the quality of the club," he said.

Having taken over with the Owls 12th in League One, he ensured that there would be no serious flirtation with relegation last season before transforming them into promotion contenders.

But, having had them into the top two, a run of four straight defeats prior to the Steel City derby proved too much for owner Milan Mandaric even when the Owls then went and beat the Blades on the Sunday.

"I've had a huge amount of support from Wednesdayites," added Megson, who has even had sympathy from Blades boss Danny Wilson and his backroom staff at Bramall Lane.

"And there's been affiliation from a lot of people who recognise that some of the things that go in on football look a little strange.

"I've even taken a few calls from people on the other side of the city.

"Those things are nice but it doesn't make up for the fact that you're no longer with the club you love."

Now it is a case of where next for Megson, who first cut his managerial teeth with Norwich City.

It may well sting him now that, of all people, the Owls should appoint as his successor, Dave Jones, who so memorably came second to Megson in one of the Championship's more dramatic tussles 10 years ago when West Brom pipped arch rivals Wolves to automatic promotion.

Megson, who has lived just four miles from Hillsborough the whole of his 16-year managerial career, says there is no reason he should not get offered another job.

"If people look at the fact and look at my record, I don't have anything to worry about," he insisted.