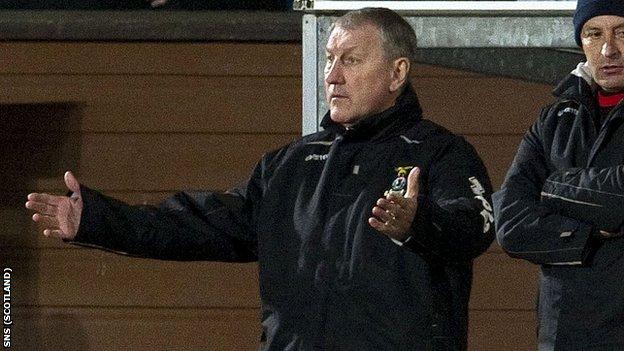 The suggested set-up would replace the current U19 league and allow five over-age players to be fielded.

But Butcher told BBC Scotland: "I think it's a step in the wrong direction.

"It's been like tutorials, we're being told 'this is what you will do'. We've not been asked our opinion and we don't like to be dictated to."

The SPL are keen on copying the model used in the Netherlands but Butcher fears it suits neither his younger players or more experienced heads on the fringes of the first team.

"There's no reserve league now, which I think is utterly wrong," added Butcher.

"This Under-20s league is going to kill us because you're looking at getting half a squad of youngsters and playing over-age players in the league for practice, so what games are the kids going to play in?

"If you've got seven subs on a Saturday, you have seven players that need to play during the week.

"And we can't play bounce games at home because no one will come to us.

"Let's go back to what we had before - a reserve league and an Under-19s league. It wasn't wrong. It wasn't broke, so why did they have to fix it?"

Butcher was speaking after his side's 3-0 defeat at Tannadice, which effectively rules out a late charge for a top-six place.

A screamer from former Inverness midfielder John Rankin had the home side in front after 15 minutes, with Scott Robertson and Johnny Russell adding second-half goals.

"We had our best spell when we were 2-0 down," explained Butcher. "For 10-15 minutes we had good control of the ball and looked as if we were going to score.

"But that's the way it's been going this season, we get into good positions and fail to hit the target.

"We got so far but that extra little bit is what puts United in the top six and leaves us where we are.

"There's a lot of soul-searching to do because, inside that dressing room, there's a team there. In games we've played very well and not got the rewards.

"What does that come down to? I don't think it's ability. It's down to other factors. And we haven't been strong enough in that department."