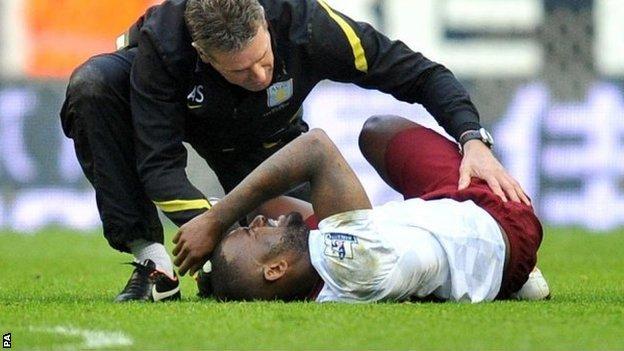 Darren Bent has had successful surgery on his ruptured ankle ligaments.

The Aston Villa striker, 28, will be out for three months and is doubtful for England's Euro 2012 campaign in Poland and Ukraine.

"The operation was a complete success and it is expected he will resume full training in around 12 weeks."

Bent sustained the injury at Wigan in February after landing awkwardly following a challenge from Antolin Alcaraz.

He is unlikely to be available until the end of May, while England's first Euro 2012 game is against France on 11 June.

"I'm gutted to be out for so long at such a crucial stage of the season," Bent wrote on Twitter at the time.

"Hopefully my recovery will be as quick as possible."

Bent had been hoping to play in his first major tournament with England after failing to make the squads for the World Cups in 2006 and 2010.

He still has a chance of making the Great Britain team at the London 2012 Olympics, as one of three over-age Villa players approached over their availability.