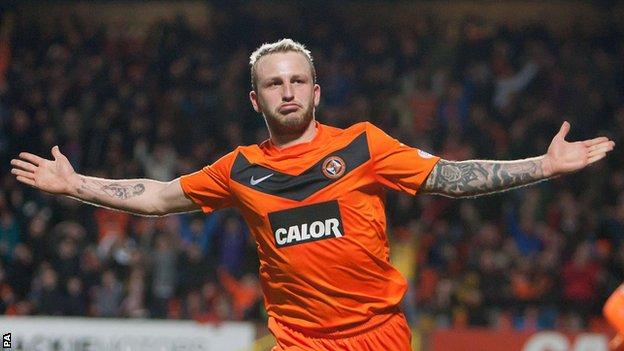 Manager Peter Houston believes his Dundee United side can further improve after seeing them beat Inverness to move up to fourth in the table.

"First and foremost the important thing was to get the three points," Houston said.

"Our performance wasn't great but a 3-0 victory and we're still scoring goals: brilliant."

In-form United faced Inverness on the back of claiming 10 points from a possible 12 in their February league outings and the win lifted them above St Johnstone on goal difference.

"It's put us seven points ahead of teams in seventh and eighth place; we're still trying to get our place in the top six secured," Houston told BBC Radio Scotland.

"I think a lot of teams will be disappointed we've won tonight."

Houston said that, despite the scoreline, Inverness did not play poorly and pointed out that Gregory Tade won "too many" headers in the first half.

"We sorted that out a bit by getting Scott Robertson to go in and challenge, allowing Sean Dillon to drop off.

"Inverness didn't play that badly and 3-0 probably flatters us a bit."

Rankin and Russell scored a couple of superb goals and Houston was delighted with their contribution.

"Rankin's looked like a 'squiggler' and I thought it was going nowhere near the goal," he admitted. "The boys on the park were saying it just dipped all of a sudden at the end.

"But I'll take that every day. Russell is a good young player and is learing every game. He's still a young lad but he's got good skills and he proved it. I'm delighted for him.

"Both strikers worked very hard and I think the team won tonight without being magnificent. I think we've played better and I dont' think the 10-day lay-off helped us in any way.

"It's good to get a game under our belts before Sunday (facing Celtic in the Scottish Cup quarter final)."