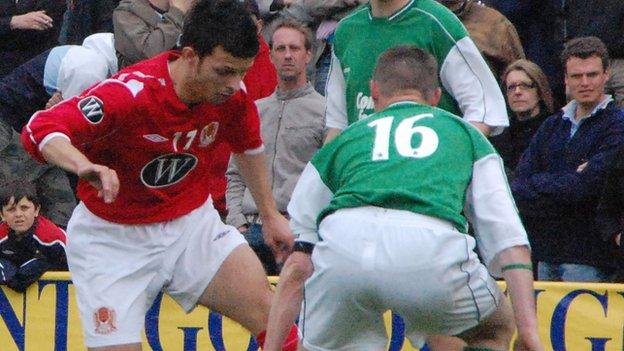 Guernsey boss Kevin Graham says the door is not closed on anyone who wants to play in the Muratti after naming his squad for the semi-final in Alderney.

If Guernsey win on 17 March they will take on old rivals Jersey on 7 May.

Graham has named 13 Guernsey FC players, but left out a number of the club's stars, such as Ryan-Zico Black and Dominic Heaume.

"There's no-one far from the Guernsey FC squad that's ruled out of contention for the Jersey game," Graham said.

"But there's a lot of football to be played before I select a side to play the Jersey game should we get through the Alderney game.

"There are still a very large pool of players who are in with a shout of wearing the green shirt on 7 May should we get there," he told BBC Guernsey.

Guernsey FC are top of the Combined Counties League Division One and host Bookham at the same time that the semi-final is being played in Alderney, and Graham says he has had talks with manager Tony Vance about picking players from his club.

Under Guernsey FA rules players must make themselves available for representative matches ahead of club games.

Earlier this season Tony Vance resigned from his role as island team manager after a disagreement with the Guernsey FA who said that any player who did not play in the Muratti semi-final in Alderney would not be considered for the final against Jersey.

"I've lost count of the number of conversations I've had with Tony and [assistant manager] Colin Fallaize about the selection process.

"We've had a lot of discussions where we've covered a number of different eventualities.

"Guernsey FC have a game that day so we've had to consider that to a point and I'm very grateful for their support in the process because I'm delighted that I have a strong line-up to take to Alderney," Graham said.