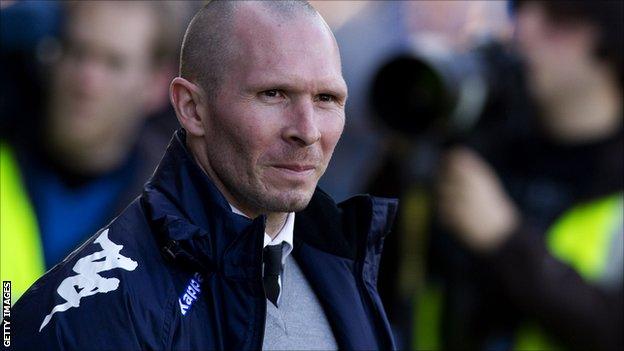 Portsmouth manager Michael Appleton says he will not walk away from the financially stricken club and has vowed to "fight on until the end".

Appleton's side are joint bottom of the Championship table after their 10-point penalty for entering administration.

The club are also close to being liquidated as they search for new owners, but Appleton is unfazed.

"I wake up every morning and I cannot wait to go to work," Appleton told BBC Radio Solent.

Since being appointed in November, Appleton has seen the collapse of the club's parent company Convers Sports Initiatives, owner Vladimir Antonov arrested on suspicion of asset stripping and 30 members of staff being made redundant - including chief executive David Lampitt.

Alongside those developments, Appleton has endured a fire sale of his best players, a transfer embargo and a series of periods during which he has not been paid.

"I try to show the players that I am willing to fight to the end. And if we have a group of players who are prepared to do the same then we have a great chance

And although the former West Brom coach admits it has been a tough time, he remains positive in the face of adversity.

"It's very difficult, all you can do is coach them and organise them as best you can," said Appleton.

"It's hard not being able to bring players in and freshen up the squad. We've had an embargo from the minute I walked through the door and I've not been able to utilise my contacts and knowledge of Championship football.

"I said to the players, we are going to lose games of football, that is what happens in the Championship, but what we don't want to do is lose is our belief.

"And as long as we don't lose our belief, there are 13 games to go, and we will get the rub of the green, and we will get a decision in our favour for once - hopefully that will be the spur we need."

"I've got reasonable qualities to continue and do the job and will continue to do my job.

"At the end of the day I am not allowed to have a bad day people because look at me for strength.

"I try to show the players that I am willing to fight to the end. And if we have a group of players who are prepared to do the same then we have a great chance."