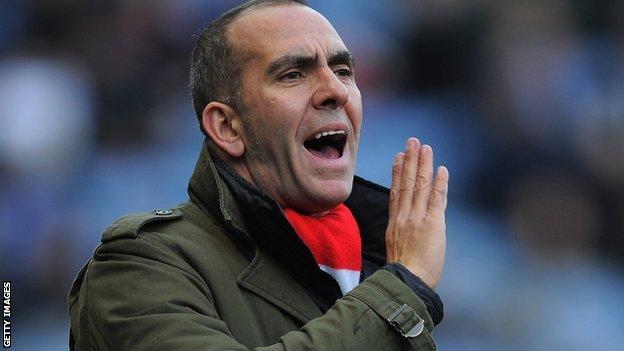 The Robins currently sit top of the League Two standings on 67 points, three clear of second-place Cheltenham with a game in hand.

"Obviously I want to finish top and I want to win 12 from 13," the Italian told BBC Wiltshire.

He added: "I don't want to say we are close, we have to focus the attention step-by-step, game-by-game. Against every team, we play for something.

Chesterfield were crowned League Two champions with 86 points, while Bury and Wycombe secured the automatic promotion places with 81 and 80 points respectively.

"Only the Swindon Town manager and players can burn the chance to go up."

Their impressive run of 10 games without defeat came to an end on Saturday at the hands of bitter rivals Oxford.

It was only their eighth league defeat of the season and Di Canio admits he was too harsh on his players after their performance.

"My demand is very high because I know they can always do much better," he said. "I was too tough on my players. I was sad, like them, and we should do better.

"I watched this game and thought 'Mamma mia, we are three categories over this level! We lost but we completely dominated the game.

"If we play like that then there is no way other teams can catch us, but obviously we have to change a few things. We need to analyse the mistakes and realise we weren't on fire a few times.

"We have to forget about it. The lads are very confident and are more relaxed than me. They didn't go sad against me because I said a few words. I wasn't wrong for the words as we can do much better."