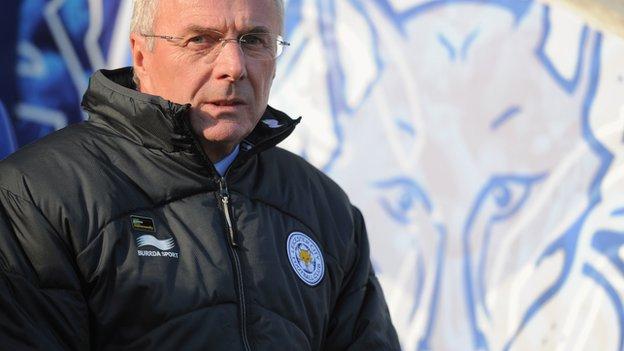 Former Leicester City manager Sven-Goran Eriksson has said he can understand why he was dismissed just 13 games into the Championship season.

The Foxes invested heavily in new players last summer and were pre-season favourites to win promotion.

But the former England boss was sacked after a 3-0 defeat against Millwall.

"The club invested money and results should have been better. If you invest, you want results. It's understandable," Eriksson told BBC Radio Leicester.

Sometimes the results will come and it will take time . The season is not finished yet and I hope they go up

"Of course I have to (take responsibility), and that is the reason why I am not sitting on the bench for Leicester.

"The owners were good. I like Thailand and Thai people but I am not sure they like me. But it's history."

However, the 64-year-old asserted he would still have helped the club challenge for promotion to the Premier League - and believes they could still go up under his replacement, Nigel Pearson, even though they are seven points adrift of the play-off places.

"Sometimes the results will come and it will take time," Eriksson added. "The season is not finished yet and I hope they go up.

"I thought when I went that we should be promoted and I still think they have a chance. The season goes on as it started, a little bit up and a little bit down. But there is still time. There is a lot of quality in that team."

Eriksson has worked in six different countries since beginning his managerial career in his native Sweden in 1977.

He achieved club success in Portugal and Italy before becoming England manager, a role which ended in disappointment at the 2006 World Cup.

Manchester City was his next port of call before he returned to international football with Mexico and then Ivory Coast, those jobs either side of a spell as director of football with Notts County.

He has not held a managerial post since leaving Leicester but on Monday, he openly expressed his interest in the vacancy at Chelsea.

"I would take it, of course," he was quoted as saying.