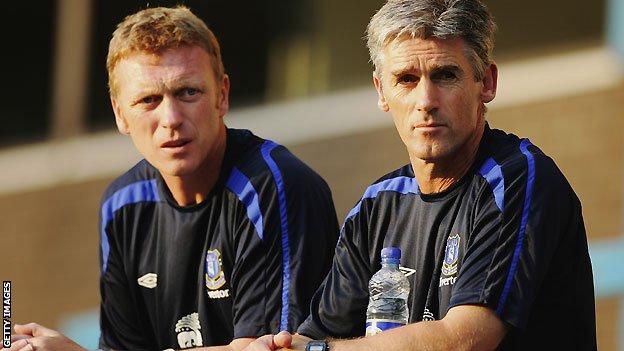 Wednesday marks 10 years since David Moyes left Preston for the challenge of restoring the fortunes of Everton.

In his decade at Goodison, the 48-year-old Scot has forged a reputation as one of the most respected managers in the Premier League.

Everton have finished in the top six in the Premier League four times under Moyes, qualifying for the Champions League in 2005, and reached the 2009 FA Cup final.

Moyes is the third-longest serving manager in England's top four divisions and was named the League Managers' Association manager of the year in 2003, 2005 and 2009.

Alan Irvine is currently in charge of the youth academy at Everton and was assistant to Moyes at Goodison for five and a half years. Here he explains why Moyes has lasted so long in such a notoriously unforgiving environment.

David's attention to detail is terrific. He leaves nothing to chance and his preparation for training sessions is very thorough.

Going from game to game, he will very quickly have an idea in his mind of how he wants to approach a fixture and how he wants his team to play. He will then structure that week's training accordingly.

I am sure that David still does some of the same training sessions he did when he first started at Everton 10 years ago, but he is always looking for new ways of trying to keep things fresh and stimulating for the players. The last thing you want as a manager is for your squad to feel bored. It is important to do something that inspires them and encourages them to reach the next level.

He demands high-intensity training and is very clear about the way that he wants it to be done. It is not about having a laugh and a joke, yet he does want them to be enjoyable and at a tempo that they will experience in a match.

David is hands-on, very much a manager who likes to coach. The coaching staff will take various sessions through the week but, when it comes to the real crunch in terms of preparing the team for a game, then he will do those.

By the time his players walk out for a match they will be in no doubt about exactly what is expected of each one of them. The instructions they have been given will be very precise and there will be no room for misinterpretation.

Mastering the art of man-management

"He takes every training session himself, and the sessions are high tempo and dynamic. He's the kind of boss that encourages you and takes the time to speak to players individually and as a group. His man-management skills are first class."

I do not think that there are many players who worked with David who would not speak highly of him. I always found that he had a good relationship with them. There was a great deal of mutual respect there.

When the team are on their pre-season tour there is always a night set aside for a meal and a few drinks. He would relax in their company but I would not say that he was very close to them and I think that is exactly the way it should be. When I worked with him I thought that he had the balance right. There was no doubt that he was the boss.

People might look at him on the touchline and think that he is a ranter and a raver, but he is not like that.

He realises that, if all you do is shout, then players will just stop listening. He very rarely loses his temper at half-time. He would rather spend his time working with the players trying to help them find a solution to a particular problem.

David is very humble and I think that humility serves him well, because it means that he is always looking to see whether he can do things better. He is very self-analytical and I think that is a quality that you will find in all the very best managers. After all who manages the managers? It has to come from within.

He is a very good learner. By that, I mean that if he makes a mistake, if he feels that he has got a big decision wrong, he will look at it and try to make sure he does not make it again.

He certainly considers every decision he makes very carefully. He rarely says anything without thinking it through in advance. I think this is part of the reason why, down the years, he has got so many big decisions spot on - too many to single out any one in particular.

In the five and a half years that I worked with him his management style definitely evolved and he improved at his job. This was because he looked at himself first to see if anything he did contributed to a problem or a mistake.

In management, it is vital that you are prepared to jump in the car, drive four hours to watch a match, drive back afterwards and get up the next morning to take training. He never complains about any of that. In fact, he sets the standards and, because of that, all of his staff fall into line behind him.

I think that David feels he has an absolutely fantastic job at Everton and he loves being at the club. As such, I do not think that he feels he is in a highly-pressurised situation. He certainly does not give that impression very often and, after 10 years, I do think that there is any doubt he can handle the pressures that come with managing in the top flight.

"David Moyes is one of the most driven and focused people I've met in football. His knowledge of the game is superb and tactically he's one of the best I've seen. I cannot speak highly enough of him."

Could David manage at the very top level? I certainly think so, without question. He has proved what he can do at Everton under difficult circumstances at times, with a small squad and a budget that is not the same as some other teams. He has got the most out of his squad and I do not see why his methods would not work elsewhere.

He is a nice man with a fantastic work ethic and the job that he has done at Everton is remarkable.

However, I have to say that owner Bill Kenwright and the board also deserve a lot of credit. When things have been a little rocky on the field - and that has happened on a few occasions down the years - there has never been the feeling that the board were going to do anything other than support David.