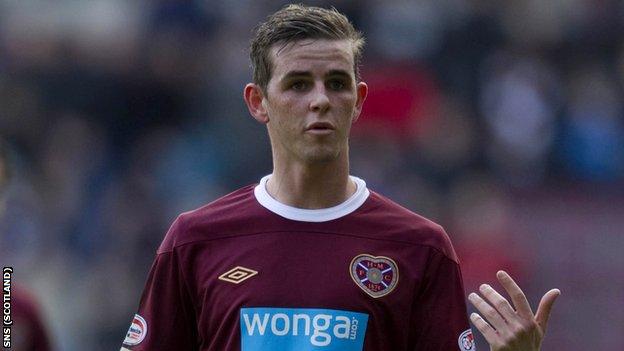 The 23-year-old has missed the last two games for Hearts as he recovers from a persistant groin injury.

"I am ahead of schedule," Templeton told BBC Scotland.

"I am looking to get back the start of April and hopefully I will be back for the Scottish Cup semi-final if the boys can get there."

Templeton also admits he has not been happy with his form throughout the current season but does feel there were signs of progress before he picked up his recent injury.

"I have been quite inconsisent," says the Scotland Under-21 international.

Templeton was linked with a move away from Hearts in January but insists that there is nothing he can do to stop speculation about a possible transfer.

"I had to wait and see what Hearts wanted to do", said the winger.

"If they didn't accept an offer then I knew I would be staying.

"Its obviously strange seeing your name linked with a move but nothing happened so I was happy to stay here at Tynecastle."

Speaking as the club launched their young player of the year awards, Templeton also admitted he has sympathy with his former Scotland Under-21 team-mate Gregg Wylde - who is one of the players leaving Rangers due to their financial problems, but has no doubts that he will find another club quickly.

"I'm pretty sure he will get another club," said Templeton. "I know Gregg and I'm sure he will be very dissapointed to be leaving there as he is also a fan."