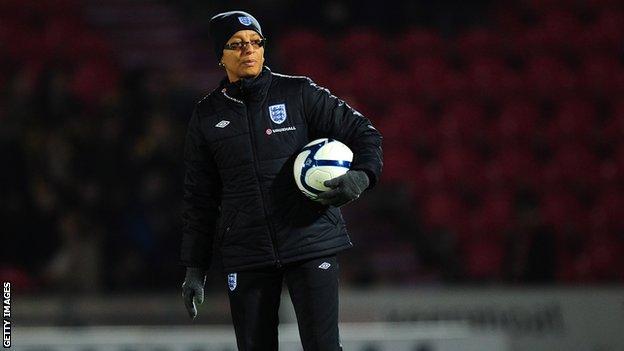 England's Cyprus Cup campaign ended in disappointment with a 3-1 defeat by Italy in the play-off for third place.

Hope Powell's team took the lead through Jade Moore, who hit her first international goal in the 25th minute.

But after impressing in the opening period, they failed to produce any clear-cut openings after the break.

Goals from Patrizia Panico, Pamela Conti and Melania Gabbiadini in the last half hour consigned England to defeat.

National coach Powell was disappointed with the result but not her team's performance.

She said: "It was a good contest and a pretty even game but they were very clinical in front of goal in the second half."

Powell paid tribute to the duo's service and maintains that she got full value out of the Cyprus Cup ahead of England's Euro 2013 qualifier with Croatia in Vrbovec on 31 March.

She added: "Both of them have been leaders for us over the years. Casey is the current captain and Fara has also been captain.

"They lead by example and it's a great achievement for them. They've been great servants to the women's game, and hopefully that can continue.

"This tournament gave me a good opportunity to have a look at all of the players. It's good for them to experience the environment, under a bit of pressure.

"It also gave me a chance to experiment and try a few new things, so all in all it was a valuable exercise and we'll grow as a result of it."

But they struggled in the games that followed, losing 3-0 to France in their final group fixture then having to settle for fourth place in the 12-nation competition.

The Cyprus Cup ended with France beating holders Canada 2-0 in the final to win the tournament for the first time.

Scotland beat South Africa 2-0 to end the competition in ninth place, while Northern Ireland finished bottom after a 5-0 drubbing by Switzerland.