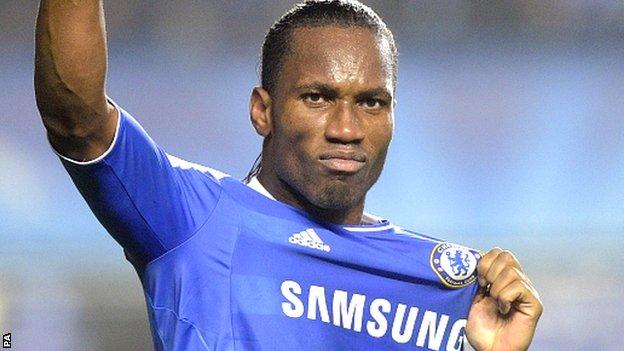 Branislav Ivanovic's extra-time goal sent Chelsea into the Champions League quarter-finals as they completed a superb comeback to beat Napoli at Stamford Bridge.

The Blues have been in turmoil since in Naples, with manager Andre Villas-Boas sacked by owner Roman Abramovich after less than 10 months in charge.

Roberto di Matteo assumed control until the end of the season - and oversaw a win of huge significance as the home side overturned that deficit on a night of high drama and emotion.

Di Matteo's side achieved their first target as goals either side of half-time from Didier Drogba and John Terry gave them the lead they required to move towards a place in the last eight.

Gokhan Inler's strike had the massed ranks of noisy Napoli supporters in ecstatic mood as he turned the tie in favour of the Serie A outfit, but this was a night when Chelsea's old guard was not to be denied.

Frank Lampard sent the tie into extra time from the penalty spot with 15 minutes left before Ivanovic's thumping finish proved to be the decisive moment.

At the final whistle Di Matteo, who had been impassive in his technical area, raced on to the pitch and into the arms of Drogba before moving around the rest of his players with the home fans delivering deafening roars of approval.

Abramovich felt he could wait no longer to dismiss Villas-Boas, even though this crucial game was looming - and he will feel that decision has been given a measure of vindication by the transformation in this Chelsea side.

The elder statesmen delivered as the Londoners showed the passion, character and commitment that was often conspicuous by its absence during Villas-Boas's brief reign.

And Abramovich can now look towards the latter stages of Europe's elite tournament with Chelsea as England's only representatives, ensuring the Premier League avoided the ignominy of being wiped out before the quarter-final stage for the first time since 1996.

The Blues will have been aware of the danger of conceding a goal at any time - and Stamford Bridge was awash with anxiety as they were forced to survive an early siege from Napoli.

There are seven different nations represented in the draw for the last eight:

Marek Hamsik had a shot blocked by the feet of tumbling home goalkeeper Petr Cech as the Italians played at a pace and tempo Chelsea found almost impossible to contain in the opening exchanges.

Edinson Cavani could only put Christian Maggio's low cross into the side-netting before Cech saved from Ezequiel Lavezzi and Hamsik again.

The hosts managed to halt some of Napoli's momentum but it was still totally against the run of play when they went ahead, Drogba twisting and turning to head Ramires' cross past visiting keeper Morgan de Sanctis.

Chelsea's enemy was now over-excitement and they almost conceded instantly when Napoli caught them cold on the counter as Cavani pulled another presentable chance across the face of goal.

Di Matteo has decided to lean heavily on his experienced players after succeeding Villas-Boas - and they delivered in style two minutes after the restart as Terry arrived to power home Lampard's corner.

It was a blow that required a response from Walter Mazzarri's side and that came when Inler chested down Terry's headed clearance on the edge of the area before showing great technique to beat Cech with a low half-volley.

As the tension mounted, Chelsea pressed and Napoli started to show real uncertainty under pressure. The break the home side needed came with 15 minutes left as former Liverpool defender Andrea Dossena handled.

German referee Felix Brych pointed to the spot and Lampard stepped up to drill his kick powerfully down the middle.

With time ticking away, the ever-dangerous Lavezzi had Cech scrambling with a dipping shot from distance that landed just over.

The action continued unabated in injury time, Hamsik flashing a wonderful volley narrowly off target and Torres just unable to take advantage from an acute angle after De Sanctis misjudged a long ball.

As extra time began, it was a case of who would blink first and Drogba turned provider seconds before the end of the first period.

The Ivorian's pull back was fired home in emphatic fashion by Ivanovic to complete the turnaround.