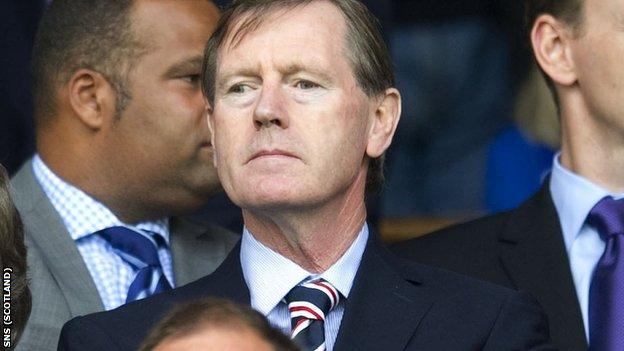 Rangers director Dave King fears the club will not exit administration and that liquidation is "inevitable".

In a statement, King said the club's owner Craig Whyte has "abused the loyalty of fans" by mortgaging future sales of tickets to Ticketus.

Whyte responded by saying he believes the club will exit administration by way of a Company Voluntary Agreement.

King claims in his statement that Sir David Murray had no knowledge that proof of funds supplied by Whyte to purchase the club was secured by season ticket sales.

I intend to remain involved with the club, at least on my present basis, post-reconstruction if that is at all possible under the new ownership structure

He was previously involved in takeover talks with the club, who were forced into administration following action from Her Majesty's Revenue and Customs over a £9m tax bill.

Along with fellow-director Paul Murray, King also made a late bid for the club in 2011 to prevent the eventual successful takeover by Whyte.

King invested £20m in the club in 2000 and is the second-largest shareholder, but has also been hit with a £250m bill after losing a 10-year battle with the taxman in South Africa.

In his statement, King said that he intended to continue his involvement with the Glasgow club in conjunction with Paul Murray and had approached the Scottish Football Association to approve him as a "fit and proper person" to be in a position of control at Ibrox.

"I intend to remain involved with the club, at least on my present basis, post-reconstruction if that is at all possible under the new ownership structure," said King.

"I am however alert to the raw sentiment around the need for Rangers to have 'fit and proper' persons at its helm.

"In view of my own well-publicised and acrimonious legal disputes with the authorities in South Africa I have taken it upon myself to approach the SFA in that regard in advance of considering an increased role in the club going forward. I will be guided by the SFA's response in that regard."

The SFA confirmed to BBC Scotland on Wednesday that King had made and enquiry regarding the criteria directors of football clubs are required to comply with.

However, former Rangers director Paul Murray told BBC Scotland he does not agree with King's belief that liquidation of the Ibrox club is inevitable and he says he is working with the administrators to try and avoid it.

Paul Murray believes liquidation would not help him in any proposed takeover bid and it would be a last resort due to the inevitable footballing implications.

Whyte shares Paul Murray's view, stating to the BBC via his spokesperson: "there is absolutely no neccessity for Rangers to go into liquidation.

"I believe we will come out of administration by way of CVA. That is in the interests of the stockholders."

In the statement, King said:

A statement on behalf of Sir David Murray released on Wednesday afternoon said: "We note with some interest, and much incredulity, Dave King's press statement.

"It is difficult to understand his motives, given he has been a director of Rangers football club since the year 2000.

"In the event that he [King] actually lodges a claim, we would vigorously defend it.

In the event that he [King] actually lodges a claim, we would vigorously defend it.

"Throughout the period of his directorship, Dave King has attended and participated in regular board meetings, including those approving the annual audited accounts, received board papers quarterly, had full access to the executive management of the club, and been privy to the same detailed financial and commercial information as every other board member."

The statement from King also expressed support for former Rangers chief executive Martin Bain and former chairman John McClelland who both left the club when Whyte took over.

King also specifically stated that he hoped former player, manager and director John Greig would "be able to resume his rightful iconic place in the director's box" soon.

Greig resigned as a director in October along with McClelland, claiming he had been sidelined by new owner Whyte.