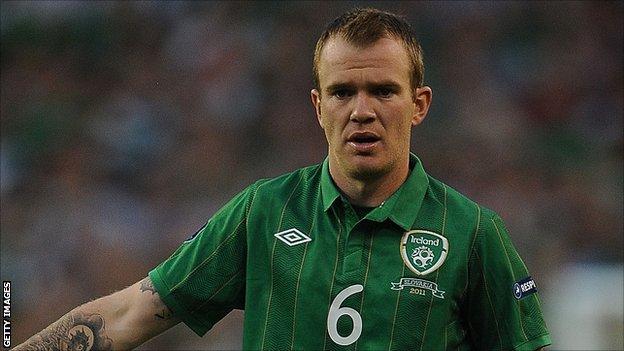 Whelan won his 37th cap against the Czech Republic on 29 February.

He surpassed the 36 appearances made by England goalkeeper Gordon Banks during his five-year spell with the Potters.

"To beat Gordon Banks, who's not just a Stoke legend but also an England legend, it will be great to look back on," Whelan told BBC Radio Stoke.

Banks won a total of 73 caps for England, with the other 37 coming before his move from Leicester City to Stoke in 1967.

Whelan, 28, made his international debut for the Republic of Ireland in June 2008, five months after joining the Potters from Sheffield Wednesday.

Three days after playing in a 1-1 draw for the Irish against the Czechs, Whelan helped Stoke to a 1-0 win against Norwich, their second consecutive Premier League victory and a result that lifted Tony Pulis's side back into the top half of the table.

"Coming off four straight defeats, we knew it was going to be really tough but they were two games [Swansea and Norwich at home] that we knew we could win," said Whelan.

"It's given us massive confidence going into the next game [at Chelsea on Saturday].

"Clean sheets are important, every team needs them, and we've got two of them in the last two games so we need to keep that up.

"We go into every game hoping to get a win and Chelsea is no different.

"We know it will be tough with the players that they've got but they're not unbeatable.

"We can go there with confidence, like what we've shown in the last two games."