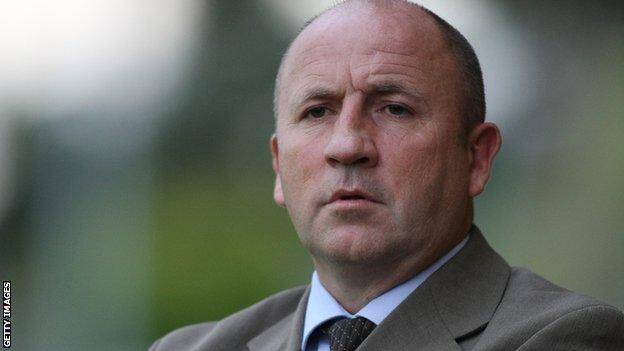 Rochdale manager John Coleman has issued an apology to the fans following the 2-1 loss at Carlisle.

Dale scored a 74th minute equaliser in the game, but conceded just two minutes later and following other results they now sit bottom of League One.

He told BBC Radio Manchester: "I'd just like to apologise to our supporters for our second-half performance.

"It was way below standard and everything we said at half-time, we didn't put into practice."

After beating Bury 3-0 in his first game as Dale manager following his move from Accrington Stanley, Coleman's side have managed just one other win in his eight games in charge.

Dale now sit five points from safety and have played a game more than some of the teams around them in the bottom-half.

With the club also having the worst goal-difference in the league, Coleman wants to see more from his players than was on show at Brunton Park.

"We were second to every ball, we backed off them and we got what we deserved, which was nothing," he added.

"We missed a couple of good chances and then we've made a couple of errors that have invited them back into the game.

"Second-half they took the game to us and we didn't have any answers and we were very, very poor.

"To get back into the game, it's heartbreaking to concede how we did, but it was symptomatic of how we played tonight.

"I feel sorry for our fans, because they came in their numbers, travelled a long way and paid a lot of hard earned money, and they deserved to be treated better than what they got in the second-half tonight."