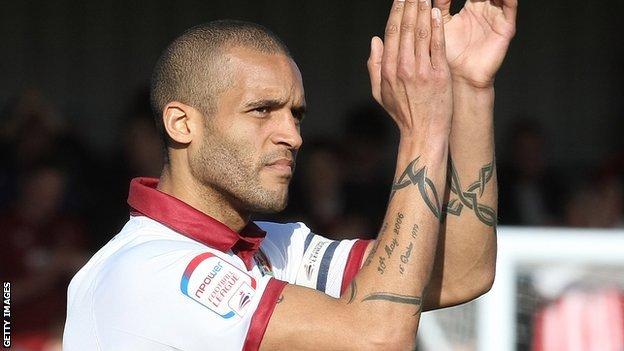 The 32-year-old joined the Cobblers on loan from Burnley until the end of the season. They have since won three of their last five league matches.

Carlisle told BBC Northampton: "Aidy Boothroyd and this bunch have ignited that fire in my belly again.

"You never lose the love but sometimes you wonder if your legs can take you on. I'm really enjoying being here."

"It can happen when you get closer to retirement," added Carlisle.

"You start to make plans and your head is in two different places at once. Coming here, Aidy has centred me again, he says what he thinks, and he's fantastic at getting the best out of men."

Northampton lie 23rd in League Two but just a point behind Hereford and Plymouth Argyle with two games in hand on both, after a 3-2 victory over Bristol Rovers.

"We won the three points, but we do want to keep more clean sheets, because we have got goals in this side.

"We've got some unbelievable creativity. We'll work on our defensive solidity and hopefully the guys up top will continue to produce.

"We want to entertain the fans, because they pay their hard-earned money to watch us and we appreciate their support, but in the position we are in, we need the points.

"I'm proud to have been involved in the past five games and I know that we're going to take that forward."