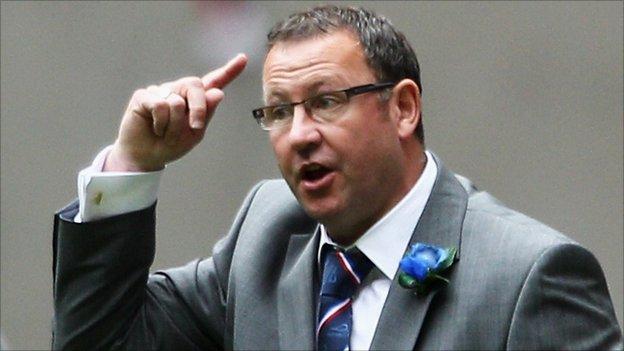 Carlisle United manager Greg Abbott has called on supporters to back his side's promotion push for the remaining 13 games of the League One season.

The Cumbrians aided their bid with a 2-1 home win against Rochdale on Tuesday, but were watched by just 3,694 fans.

"We're boxing well above our weight, so we want fans to come and help us," Abbott told BBC Radio Cumbria.

Abbott added: "Our fans, although there were only 3,600, were absolutely fantastic and I applaud them, and they need to spread the word that we mean business."

Since taking over as manager following John Ward's departure in November 2008, Abbott has led the club to two Wembley appearances and a Johnstone's Paint Trophy success.

This season has seen Carlisle transfer their form in knock-out competition into League One, and a 13-match unbeaten home run has placed the club among big spenders MK Dons, Huddersfield and Notts County in the battle for the play-offs.

However the average crowd at Brunton Park has been 4,833 from a segregated capacity of 17,902, and at 29% the support to capacity ratio is the lowest in the division.

"We need every bit of help we can get, this is a really tough ask for a club with the resources we've got behind us and the size of the squad and how difficult it is against the big teams," Abbott continued.

"Can we give this city some excitement? Come down and have a look at us and see where you can take us, we can't do it on our own, we've proved that, we need the fans.

"We need everybody through that gate, singing from the same hymn sheet.

"Six thousand in here is fantastic, it's the type of stadium that generates an unbelieveable atmosphere.

"If we're going to do what everybody wants us to do, we need you here."