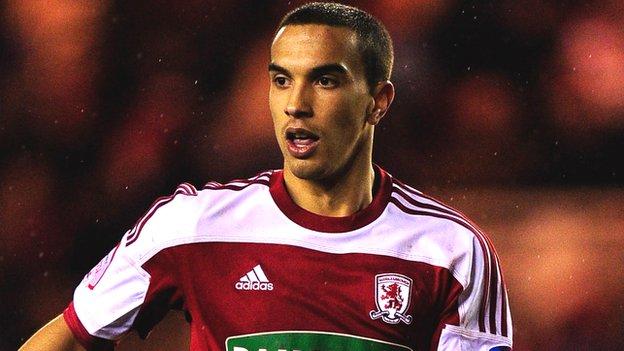 Middlesbrough manager Tony Mowbray has said he is proud of the return to form of Seb Hines after a spell out of the side earlier in the season.

The 23-year-old defender has missed just three games since the turn of the year to cement a regular place.

"I said to him - be patient, you can be the centre-half here for the next 10 years," Mowbray told BBC Tees.

"If you wait for an opportunity, when it comes you have to grab it and the boy has done fantastically well."

Hines was on the scoresheet in Boro's 2-0 home win against Barnsley on Tuesday, only the second league goal of his career.

"He's a Trojan out there, really puts his head on everything, he's fast and mobile and defends with everything he's got," Mowbray added.

"We're delighted he's in the team and doing well, and I'm personally pleased for the boy as he took it on the chin when he wasn't in the team earlier in the season."

Meanwhile Mowbray also praised striker Bart Ogbeche, who came off the bench to add an injury-time second for the Teessiders at the Riverside.

Ogbeche, 27, has been limited to five starts since joining Boro after leaving Greek side Kavala.

"He's always smiling around the training ground, he's got an infectious personality, he's desperate to do well," Mowbray added.

"Whilst he generally gets on the bench, Curtis Main has pushed ahead of him, but Bart's not the type to moan and complain, he gets on with it and got his rewards.

"It wasn't just his goal, he worked extremely hard, got some important challenges in, held the ball up well and looked a threat."