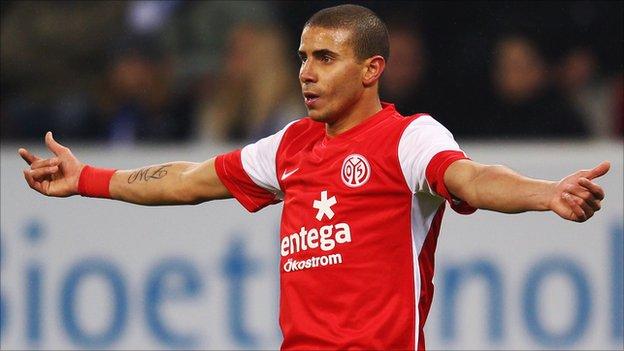 Mainz 05 forward Mohamed Zidan has been fined after the Egyptian swore at rival fans during a German league match.

The German Football Federation (DFB) imposed the 6,000 Euros (US$7,880) fine for "unsporting behaviour" during Mainz's 4-0 derby win over Kaiserslautern on 25 February.

The DFB's disciplinary tribunal said Zidan climbed the fence in front of the fans and began singing along with them.

It said the Egypt international, 30, had accepted the decision.

Zidan has already apologised for his actions to both Kaiserslautern boss Stefan Kuntz and the fans immediately after the incident.

"I regret getting carried away in the euphoria following our home win," he said.

The two-time Nations Cup champion joined Mainz from champions Borussia Dortmund in January and has since equalled Bundesliga history.

His second-minute goal at home to Kaiserslautern was one of five he has scored in each of his five games for his new club.

When he scored against former club Dortmund last Saturday, he became the first player to score in his opening five games for a new club since Stuttgart striker Fredi Bobic in 1994.