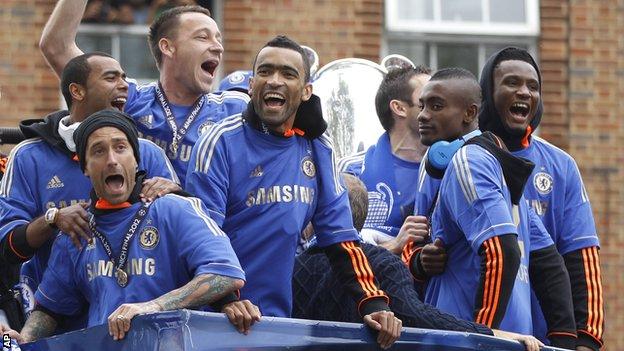 BBC Sport outlines the promotion and relegation issues - and European qualifiers - in England and Scotland.

The three Europa League entrants will be fourth-placed Tottenham Hotspur (at the group stage), fifth-placed Newcastle United (in the play-off round) and Carling Cup winners Liverpool (in the third qualifying round).

There is no extra Europa League place for England from Uefa's Respect Fair Play league this season after the three places went to Norway, Finland and the Netherlands.

Bolton Wanderers, Blackburn Rovers and Wolverhampton Wanderers are relegated to the Championship.

Portsmouth, Coventry City and Doncaster Rovers are relegated to League One.

Hereford United and Macclesfield Town are relegated to the Blue Square Bet Premier.

Why can Rangers not play in Europe next season?

1) The likelihood of being able to emerge successfully from administration before the 31 March deadline was, at best, "optimistic" given the club's financial situation

2) The company accounts cannot be signed off by auditors in a manner that would meet the criteria required by the footballing authorities as the club would have to satisfy a going concern test confirming how it will continue to be funded until the end of next season. Given that the administrator did not know who will own the club by 31 March, this could not be reasonably guaranteed

3) Under Uefa regulations, Rangers must have paid or settled all tax debts outstanding at 31 December 2011, which are estimated to be at least £5m - another guarantee the administrator cannot fulfil

4) The club must have paid or compromised all of its outstanding creditors prior to the 31 March deadline, which did not happen

Read more from the statement

Champions Celtic will enter the Champions League along with third-placed Motherwell, because runners-up Rangers are unable to compete in Europe after they went into administration and were unable to meet a Uefa deadline of 31 March to submit accounts.

Celtic and Motherwell will both join the Champions League at the third qualifying round stage.

Scottish Cup winners Hearts enter the Europa League in the play-off round, fourth-placed Dundee United in the third qualifying round and sixth-placed St Johnstone (who take the league place vacated by fifth-placed Hearts) in the second qualifying round.

There is no extra Europa League place for Scotland from Uefa's Respect Fair Play league this season after the three places went to Norway, Finland and the Netherlands.

Bottom club Dunfermline will be relegated to Division One,

Champions Ross County are promoted to the SPL.

Bottom club Queen of the South are relegated to Division Two, as are ninth-placed Ayr United who lost in the play-off semi-finals.

Champions Cowdenbeath and play-off winners Dumbarton are promoted to Division One.

There is no relegation from this division, although East Stirling finished as the lowest-placed team in Scottish senior football this season.