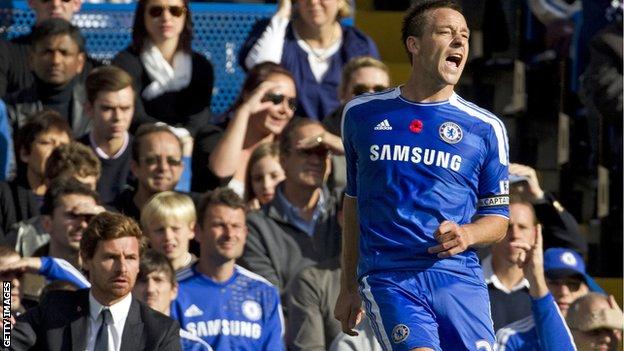 Chelsea captain John Terry has admitted that he and his team-mates share the blame for the results that prompted former manager Andre Villas-Boas' exit.

"I think the players would hold their hands up and say, 'Clearly, we've not been good enough and we all made mistakes'," he told Chelsea TV.

"Sad for Andre, because unfortunately it falls on his head."

Villas-Boas was sacked and replaced by caretaker boss Roberto di Matteo after winning one of his final seven matches.

Terry made a surprise return to the Blues' squad after knee surgery as an unused substitute in Tuesday's 2-0 FA Cup win over Birmingham.

The 31-year-old claimed that the victory at St Andrew's was both a tribute to the departing Villas-Boas, and a product of Di Matteo's and assistant Eddie Newton's affinity with the club.

"We dug deep for him, for Robbie as well taking charge, Eddie coming in as well," added Terry.

"We've done enough talking amongst ourselves over the last three or four months.

"Robbie came in and said those exact same things as well.

"He's been here, played here, the same as Eddie. We have to fight for the shirt and that was the message to the lads."

Terry said the upheaval at the club made him more determined to come back quickly following knee surgery.

The defender was on the bench for Tuesday's match just a fortnight after being ruled out for six weeks.

"Once I had the operation, I was literally jogging about after two days, which was incredible," he added.

"I said to the physios, the way things were here, I just wanted to push myself and be involved and try to get back as quickly as possible."

Midfielder Juan Mata had insisted earlier that the onus is now on the squad to improve their results.

"We are with the new manager because it is what we have to do," said Mata.

"The most important thing to think about is the coach we have now. We must just think about this season and finish the next two months well."

"For me and the other players, we are playing in a top squad and for a top club and we must always do our best in every game.

"This week was not easy for us with a change of manager but, when you're on the pitch, you're always thinking to give your best to try to win and that's what we did.

"It's never good news to change a manager. If this happens it's because things have not been good. Andre was a very good manager and a very good person as well.

"We were sad when he left because it's always a difficult moment when a club changes its manager, but now we are going to keep working without him and with Robbie instead.

"We have to prove ourselves in every game."