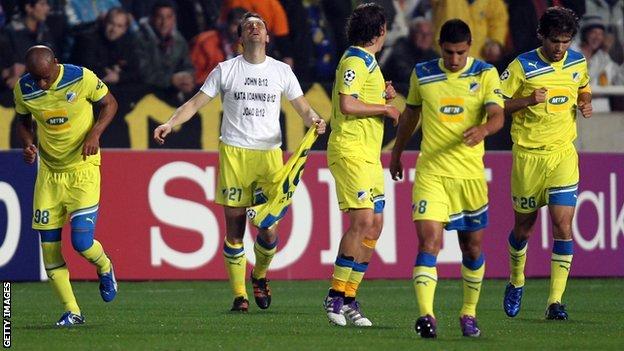 Keeper Dionisios Chiotis ensured Apoel Nicosia's Champions League fairytale continued as the European minnows knocked out Lyon on penalties to book a place in the quarter-finals.

The Cypriot champions trailed 1-0 from the first leg but Gustavo Manduca levelled on aggregate in the ninth minute, tapping home from close range following a cross by Constantinos Charalambides.

Apoel almost went ahead on aggregate when Aly Cissokho headed against his own woodwork.

The hosts had Manduca sent off for a second bookable offence shortly before the end of extra-time, but Chiotis denied Alexandre Lacazette and Michel Bastos from the spot to spark jubilant scenes at the GSP Stadium.

Apoel have enjoyed some wonderful European nights this season - 2-1 wins over Zenit St Petersburg and Porto are among the highlights - but nothing matched this.

Ivan Jovanovic's side managed a solitary attempt on goal in the first leg in France but found the net with their first threatening attack in Nicosia.

The Lyon defence failed to deal with Charalambides's low cross and Brazilian Manduca was on hand to tap home.

Lyon, who dominated the first leg, were guilty of wasting several chances again.

Ederson was denied by Chiotis's fingertip save, Michel Bastos nodded wastefuly wide and Edersn was unable to keep his header on target.

The home side continued to put the Lyon defence under pressure after the interval but the closest they came to scoring was when Cissokho was saved by the frame of the goal in the 56th minute.

Although Manduca was dismissed for a clumsy challenge on Lyon substitute Lacazette, the drama was far from over.

Ailton, Nuno Morais, Nektarios Alexandrou and Ivan Trickovski held their nerve from the penalty spot as Apoel went through in thrilling fashion.