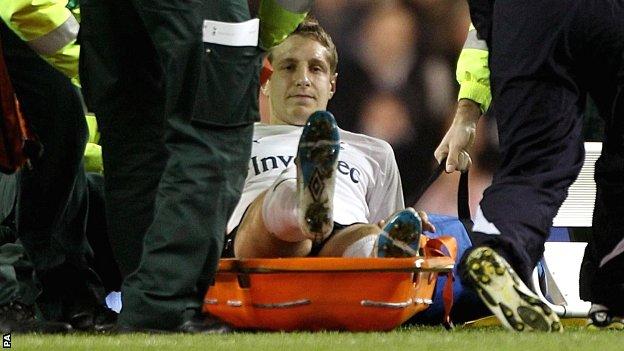 Tottenham's Michael Dawson has been ruled out for 10-12 weeks after rupturing a ligament in his right ankle in the FA Cup win over Stevenage.

The defender will be sidelined until after Spurs' final league match of the season against Aston Villa on 13 May.

He could return for the first of England's two pre-Euro 2012 friendlies against Norway in Oslo on 26 May.

England, who are without a permanent coach, have to announce their 23-man squad for the tournament before 29 May.

Aston Villa striker Darren Bent is another major doubt to make the trip to Poland and Ukraine after suffering an ankle ligament injury of his own in February.

Dawson's team-mate Aaron Lennon was also forced off with a hamstring injury in the first half of the 3-1 fifth-round replay victory at White Hart Lane, which set up a quarter-final tie against Bolton.

"Every time he plays he seems to do his hamstring," added Redknapp, who was more positive about Jermain Defoe's chances of making the England squad in the summer after his two well-taken goals.

"It's good to see Jermain back scoring. He is a good finisher and a good player. He must have a chance [of an international recall].

"That is a problem area for England. There is a shortage of top strikers and Jermain is up there with the best of them when he is sharp and on form, and he is looking sharp at the moment. I have been delighted with him."