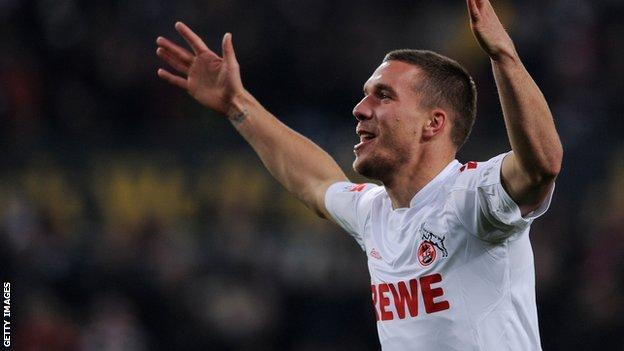 Podolski will have to pass a medical and agree personal terms before the move can be completed in the summer.

Arsenal's Per Mertesacker said: "He has sent me a number of text messages and I have told him this is a great place to work and Arsenal are an amazing club."

The pair have played together for Germany since 2004 and now look set to join forces at club level as well.

Cologne boss Stale Solbakken admitted last month he could lose Podolski to Arsenal and the transfer is now at an advanced stage.

PODOLSKI AT A GLANCE

The Poland-born forward, whose contract expires in summer 2013, started his career with Cologne and joined Bayern Munich in 2006 before returning to his first club in 2009.

Podolski scored three goals to help his country qualify for Euro 2012 and has scored 16 goals in 22 club games this season.

Big-spending Russian clubs Lokomotiv Moscow and Anzhi Makhachkala were also understood to be pursuing Podolski but he recently stated that money was not his prime concern.

"Money is not the most important thing for me," he told German newspaper Sport-Bild. "What is crucial is the development of my game."

Cologne currently sit 14th in the Bundesliga, with Podolski having scored more goals (16) than all of his team-mates put together (15).