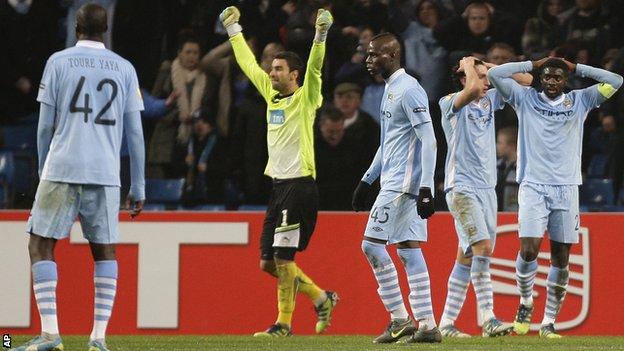 Manchester City's fightback failed to save them from a shock Europa League exit on away goals to Sporting Lisbon.

Trailing 1-0 from the first leg in the last-16 tie, City fell further behind from a Matias Fernandez free-kick.

Ricky van Wolfswinkel made it 3-0 on aggregate before Sergio Aguero reduced the deficit, and Mario Balotelli's penalty made it 2-2 on the night.

Aguero scored again and goalkeeper Joe Hart was denied a spectacular winner when his header was saved at the death.

It was a dramatic finale as Hart, who had stayed in the box after going up for a corner, fired a powerful header towards the corner of the goal which Rui Patricio, his opposite number, saved brilliantly.

At the start the shape was wrong, the tactics were wrong and, for the first two-thirds of the game, they were poor. The worst thing is that you could see from the last 30 minutes how much better City were than Sporting. If they had played anything like that for the full 180 minutes of the tie, they would have gone through comfortably

Yet when the dust settles on an absorbing night's action, City's first-half performance, left them with too much to do.

City must now win the Premier League title if they are to avoid finishing the season without a trophy.

Having eliminated Portuguese league leaders and reigning Europa League holders Porto in the last round, Roberto Mancini's side would not have expected another Portuguese club to end their attempt to reach the final in Bucharest.

But the Italian will be alarmed at the way his expensively-assembled side started Thursday's second leg.

With no game this weekend to worry about, Mancini could afford to field his strongest side and, with goals required, he recalled Aguero to play alongside Balotelli.

Yet Mancini spent most of the first half venting his frustration as his players carried on from where they left off in Wales, where defeat at Swansea on Sunday cost them top spot in the Premier League.

The swagger and urgency that City have displayed during their five-month stay at the top of the table were non-existent in a sloppy first half in which they failed to seriously test Patricio.

Despite going out of the Europa League, City are now unbeaten in 17 home matches in Europe

City showed little urgency as they found themselves 2-0 behind before the break, Fernandez scoring from a stunning 20-yard free-kick in the 33rd minute before Van Wolfswinkel made it 2-0 when he tapped home following Marat Izmailov's 40th-minute cross.

Aguero launched City's comeback when he produced a fine 60th-minute finish from inside the area before the same player won a penalty after being felled by Renato Neto in the 72nd minute.

Balotelli made no mistake from the spot before Aguero remarkably put City ahead on the night after being left unmarked at the back post in the 82nd minute.

But City were unable to score a fourth - despite Hart's last-gasp attempt.