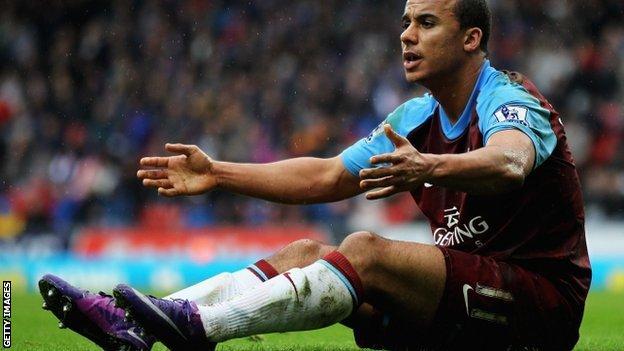 Agbonlahor said that supporters needed to get behind McLeish who moved to Villa Park from rivals Birmingham City in the summer.

"It does have an impact on the players and does affect them when fans are not backing the manager and not turning up in games," said Agbonlahor.

Villa are currently 15th in the Premier League table.

Agbonlahor added: "The fans are entitled to their opinions, but the chairman [Randy Lerner] has made a choice in bringing the manager here and everyone has got to get behind him.

"I think it affects the players otherwise. You only have to look at the situation at Blackburn where Steve Kean has been getting a lot of abuse.

"In previous years the fans have got behind the team no matter what and that helps the players.

"If they really get behind the team and the players, it gives everyone a lift."

McLeish said he had the experience to handle supporters' criticism after his men were booed off the pitch following a 0-0 draw at Wigan on 25 February.

It was the among a series of hostile incidents from fans since he took over at the club at the start of the season.

Villa have drawn or lost their previous five Premier League matches, leaving them with 30 points after 27 games.

Protests against McLeish began even before his appointment as Villa manager.

In June, about 1,000 supporters staged a demonstration at Villa Park against owner Randy Lerner's decision to push through a move to get him.