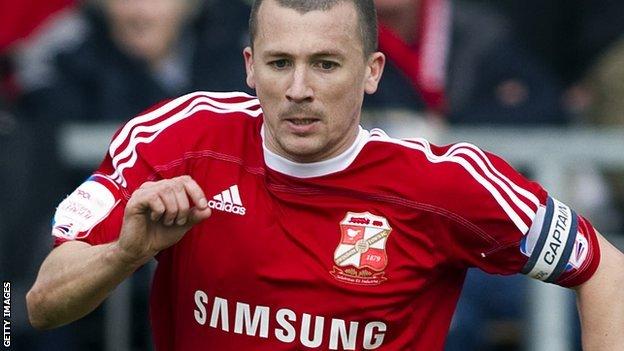 Swindon Town captain Paul Caddis should be fit to play in the Johnstone's Paint Trophy final later this month after scans revealed his ankle injury was not as bad as first feared.

The right-back was taken off in Tuesday's 4-0 win over Dagenham.

It was thought Caddis, 22, had damaged the ligaments in his ankle but X-rays revealed this was not the case.

He is expected to return to the side for their clash with Chesterfield at Wembley on 25 March.

However, Caddis is set to miss league games against Cheltenham, Crewe and Torquay.

Before his injury, the Scotsman had started every league game this season, netting four goals in the process.

Di Canio picked up the February award after leading his side to six wins from six games to lift Swindon to the top of the table.

Benson, who arrived from Charlton in January, scored five goals last month to take his Robins total to eight from 14 matches.