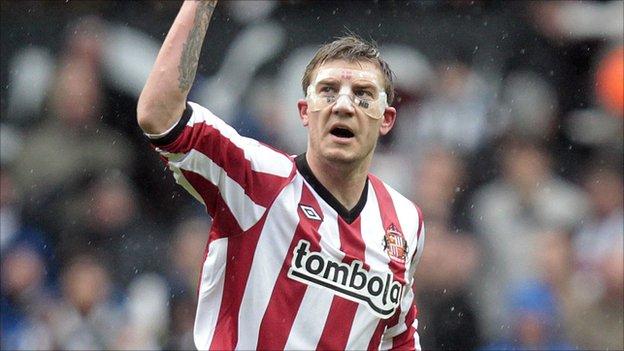 The Denmark international, 24, was taken to hospital after he fractured his eye socket in a challenge with Swans defender Angel Rangel.

"I couldn't see out of my eye for four or five hours and had to stay in hospital overnight as well."

Bendtner, on loan from Arsenal until the end of the season, scored Sunderland's opener in the 1-1 derby draw with Newcastle United on Sunday.

Prior to his return against West Bromwich Albion the week before, the striker missed a month of football in recovery and has worn a protective mask in his last two outings.

"I don't mind getting a kick or broken nose or jaw that will heal, but your eyes are the most important thing," Bendtner said.

"As soon as I got the kick, I couldn't see anything, and my first thought was 'I'm blind', so I was really pleased when, with my hands, I could open my eye and see loads of red stuff.

"I hope there's a guardian angel watching over me.

"I just take it as it comes, I don't think back about it, it's two horrible moments but you have to look forward."

Scoring in the Tyne-Wear derby was a bright moment in a mixed spell on Wearside for Bendtner, in which he has scored four goals in 19 games, and has also seen his arrest for criminal damage.

"You have to prove yourself every game, it's important to keep a consistent level," Bendtner said.

"But when you know how much it means to the fans it's always nice to score in a derby."