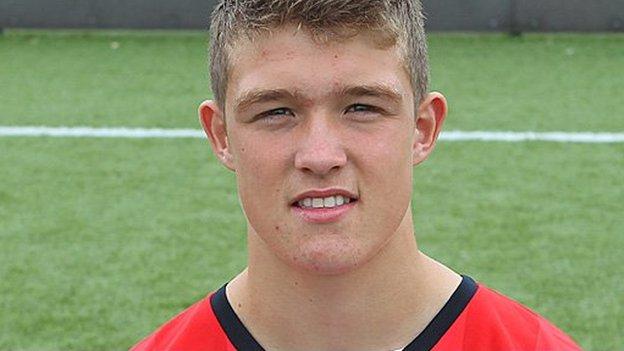 Crewe's Max Clayton says playing for England Under-18s in his hometown was the proudest moment of his life.

The 17-year-old striker played for the full 90 minutes in England's 3-0 win over Poland in a friendly at the Alexandra Stadium on Wednesday.

He told BBC Radio Stoke: "It was an amazing experience and it will be something I will never forget."

Clayton, and his Alex team-mate Nick Powell, were the only two players from outside the top two divisions to start.

The Alex forward, who has been a regular in the League Two side's first team squad this season, has represented England at U16 and U17 level, and featured for the U18s in Slovakia earlier this season.

Clayton was part of the England squad that reached the European Championship semi-final in Serbia, and then went on to play in the quarter finals of the U17 World Cup in Mexico last season, scoring against Uruguay in the group stages.

"Being with the England squad is great experience for me, and everyone treats us well," he continued.

"Playing at Crewe for England was the proudest moment of my life, and it is really hard to explain what it meant to me."

Both Clayton and Powell will be back in the Crewe first team squad to play at Gillingham on Saturday.