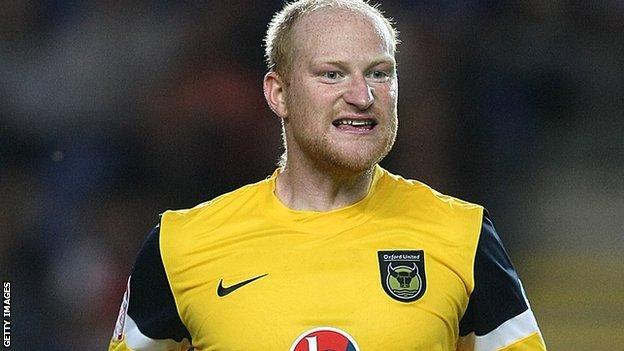 Oxford United utility man Andy Whing says he is delighted that he has won over the supporters who were critical of him at the start of the season.

The 27-year-old has proved to be one of United's most committed and consistent performers and is now a firm favourite.

"I didn't play to my full potential, but the last few months they have taken to me," Whing told BBC Radio Oxford.

Whing, who signed from Leyton Orient in the summer, has emerged as a key member of manager Chris Wilder's squad, highlighted most recently in wholehearted displays against Swindon and Shrewsbury.

"In the last few months they've taken to me because of my performances on the pitch," he added.

"Giving 110% is the minimum and I'm just delighted the fans are taking to me now and they gave me a great reception at the ground the other day.

"Hopefully we can give promotion back to the fans who have been fantastic really."

Despite a mounting injury crisis, Oxford have continued to keep up their push for promotion, beating rivals Swindon last weekend and drawing with high-flying Shrewsbury in the week.

And Whing, who has played 32 times this season in either defence or midfield, believes the U's have the squad to cope with injury problems.

"Some teams thrive under adversity," he said.