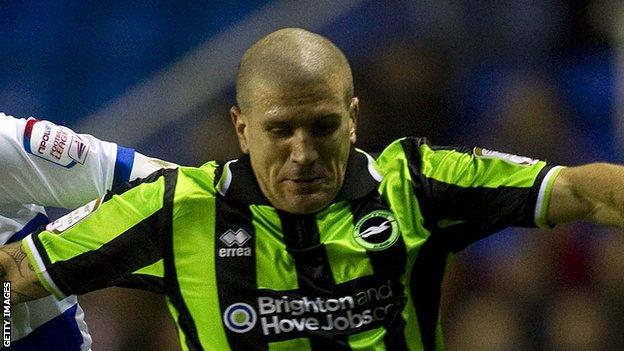 Brighton & Hove Albion defender Adam El-Abd says the club has been transformed in the time he has clocked up 250 league appearances.

The 27-year-old, who made his debut in 2003, reached the milestone in the 2-2 draw with Cardiff on Wednesday.

He told BBC Sussex: "It's a great achievement and I'm really proud of it. It's a completely different club to the one when I first started.

"We've got a phenomenal squad. It's definitely the best we've had."

He added: "It bodes well because it keeps everyone on their toes as we all know we've got to play well to keep our place."

The draw with Cardiff extended Albion's unbeaten run in the Championship to 11 games, and El-Abd believes the result could be important as the Seagulls bid to make the play-offs.

"The boys showed tremendous character to come back twice after two sucker-punches," he continued.

"We got a point that is going to be crucial in the run-in, because they're one of our rivals.

"There's 11 games to go and we've got to play a lot of the teams around us. It's a massive game on Saturday now [at home to Portsmouth] that we look forward to."

Brighton were in the fourth tier of English football and playing at the Withdean Stadium when El-Abd made his Seagulls debut but they are now seventh in the Championship with a good chance of gaining promotion to the Premier League.