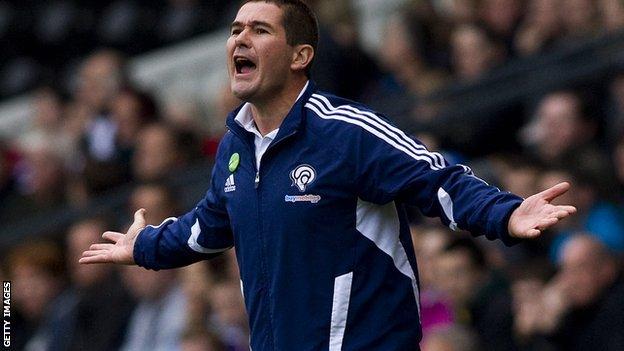 Davies has made 27 appearances this season, but only three this year.

However, he returned to the side from the bench against Birmingham and set up a goal, and also provided an assist in the midweek win against Blackpool.

"Ben's never been far from the team but Jamie's kept him out with his form. Ben has got his chance now and I hope he takes it," Clough told BBC Radio Derby.

Ward is struggling with a thigh injury and is likely to be out until the middle of March.

When you see Ben Davies put in crosses like the ones in the game at Birmingham and home to Blackpool you know why Nigel Clough was so keen to bring him back in. Namesake Steve Davies has benefited from Ben's return with two headed goals. After a bright start to this season, a loss of form saw him lose out to Jamie Ward and it's down to the player to retain his place

Clough added: "Ben does play in the same position as Jamie. Jamie was playing so well after Christmas, then he dipped a little bit but now his injury gives Ben another opportunity."

Davies, 30, made his first start in almost three months against Blackpool in midweek, and set up Steven Davies' winner.

The former Notts County playmaker added: "It's been frustrating. It's hard watching games. I'm not a good watcher.

"When the lads were doing well at at the start, the team takes care of itself but over the last month or six weeks when we haven't been winning, it's been hard.

"When you get your chance you have to contribute and I know I will get balls into the box. The gaffer knew I was ready. He put me back in on Saturday and luckily it's gone well.

"I'm one or two assists off being top of the assists in the league so it would be nice to be top.

"I just want to try to play after the last couple of months. If I get a chance hopefully I can take it.

"It's a squad game and there are some good players at the club, but everyone wants to play and if I keep providing assists then hopefully I can stay in the team."

And Davies said the win over the Seasiders was a huge result for the Rams after as dismal run of seven league games without a win.

"We desperately needed that - especially at home," Davies said. "We played well and kept the ball well and we fully deserved it.

"If we can beat Watford [on Saturday] it will take us into the derby against Forest [on Tuesday] in a great run of form."