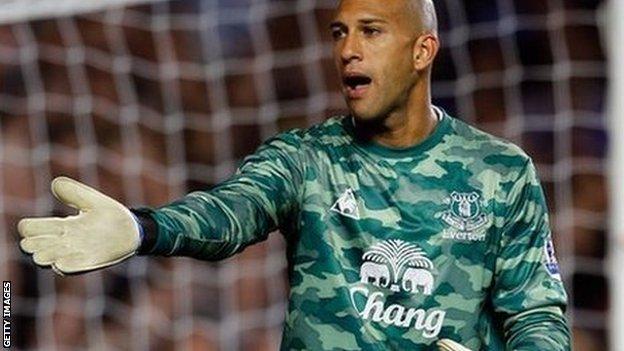 Everton keeper Tim Howard has signed a new deal with the club until 2016.

The United States international has made 256 appearances for the Toffees after joining from Manchester United in 2006, initially on loan.

"I couldn't be happier," he told the club's website. "I've had a smile on my face ever since we finalised the deal."

Premier League goalkeepers who have found the net

Howard famously scored his first professional goal during Everton's 2-1 defeat by Bolton on 4 January, when his goal kick was assisted by strong winds.

It was the fourth time a goalkeeper had scored in Premier League history.

Howard signed a permanent deal with Everton in February 2007 and the new contract means he is set to spend a decade at Goodison Park.

"When you have a really good relationship in life and both sides are eager to continue and keep that going, it's a no-brainer.

"This hasn't been a knockdown, drawn-out type of negotiation with meetings or anything like that.