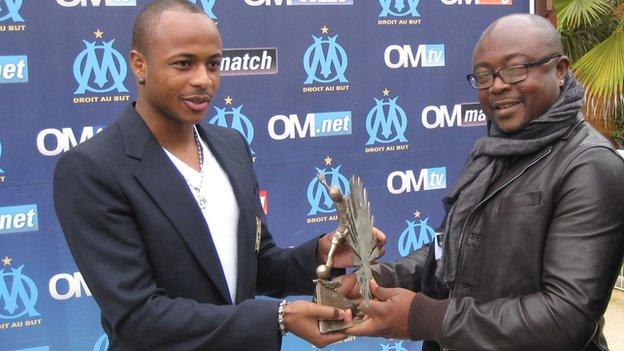 Marseille will be without attacking midfielder Andre Ayew for Friday's crucial game at Ajaccio, coach Didier Deschamps has revealed.

Ayew, the reigning BBC African Footballer of the Year, misses out due to a long-standing shoulder injury.

"(Ayew) won't be there because his shoulder is handicapping him and causing him pain," said Deschamps.

The coach added that Ayew is expected to be fit for Tuesday's Champions League clash away to Inter Milan.

The French side lead the tie 1-0 on aggregate thanks to Ayew's last-minute winner in the home game on 22 February.

Last month, the Ghana international vowed to play through the pain of his injured shoulder rather than undergo an operation that would end his season early.

The 22-year-old aggravated his shoulder during this year's Africa Cup of Nations, when it caused him clear discomfort in the latter stages.

"I dislocated the shoulder several times. Today, it does not take much," he told Marseille's club website last month.

"If I have an operation now, my season is over. It would not be beneficial either for me or for the club. I must grit my teeth, as I have been doing for some time.

"If it does not hold up any longer, I will have to have the operation, but if I can hold on until the end of the season I will make a decision then."

Should Ayew undergo an operation at the end of the European season in May, his place in Ghana's World Cup and Nations Cup qualifiers the following month would be in serious doubt.

Deschamps also announced that Cameroon's Stephane Mbia is in line to make his comeback against Ajaccio after injury.

Victory at relegation-threatened Ajaccio is imperative for Marseille, who have fallen eight points below the Champions League places after losing their last three games.