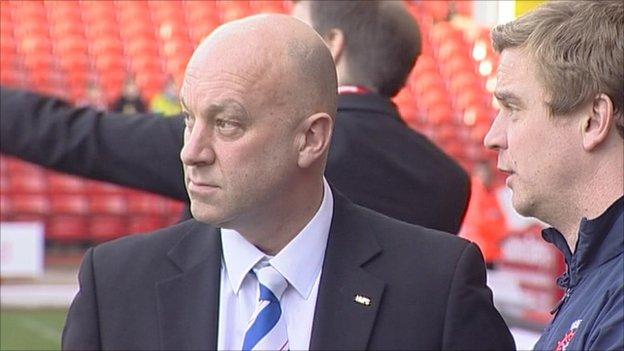 Neale Cooper has said the humiliation of defeat by strugglers Wycombe should ward off complacency in the Hartlepool squad for Saturday's trip to Walsall.

Last month's 5-0 defeat came with the Chairboys struggling in League One, a similar position to the Saddlers.

"Wycombe were down at the bottom, and they turned us over and hopefully that was a one-off," Cooper told BBC Tees.

"We've had that scare, and we prepare exactly the same whether the team is at the top or the bottom of the league."

Cooper's hopes of a result at the Bescot Stadium on Saturday could be affected by the absence of four first-team players.

Samuel Adjei has returned to parent club Newcastle United after picking up a hamstring strain, while Gary Liddle, Luke James and James Poole are all absent.

Poole's injury is a particular blow for Pools, coming two games into the 21-year-old's return to action after a two-month absence with a hamstring strain.

"When you have a hamstring injury you do train the best you can without stressing the injury, on bikes and machines to keep their fitness up," Cooper added.

"So when they come back they are fit, but then they'll get an injury on the other leg, not the hamstring but the opposite leg.

"When I saw him back training and playing I thought he'd be the exciting one to give us a lift, so it's majorly frustrating for James, plus for me."