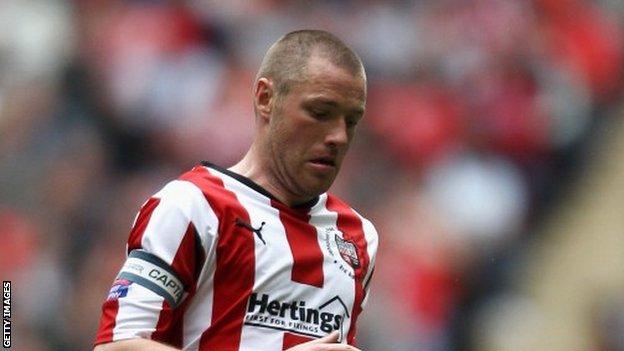 Crawley Town have signed forward Gary Alexander on loan from Brentford until the end of the season.

The 32-year-old, who has scored 14 goals in 30 appearances for the Bees this season, will make the move permanent in the summer.

Reds boss Steve Evans told BBC Sussex: "Everyone knows Gary is a top goalscorer. He's got much more to give and I'm sure he'll do a fantastic job.

"He's brave, strong and gets all kinds of goals. He'll play a big part."

Alexander has scored over 160 goals during his career, and Evans believes the former Hull, Leyton Orient and Millwall player can fill the hole left by the departures of strikers Tyrone Barnett and Matt Tubbs.

"We need to move on without those players, who've furthered their careers," Evans added.

"There were plenty of smiles in the dressing room when Gary walked in and if he works with the same endeavour as he did for Brentford then goals will follow."

Writing on Twitter, Alexander said: "I wanted two years and wasn't going to get it so I had to move on. Stability for my family was the factor (for moving) nothing else."

Meanwhile Brentford have extended the loan of Watford defender Adam Thompson until 10 April.