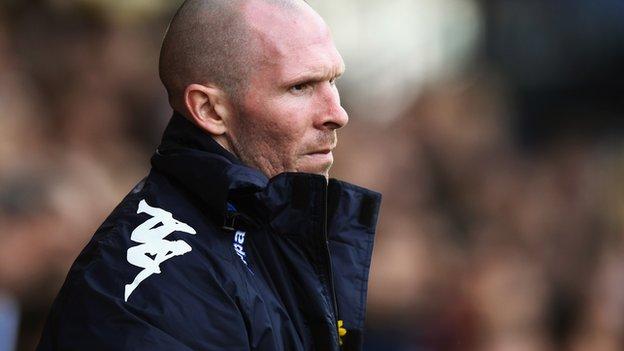 Portsmouth boss Michael Appleton admits his beleaguered side have been lifted by the news they will receive around £800,000 from the Football League.

The troubled club came to an agreement with the Football League on Wednesday to receive four monthly payments between now and the end of the season.

"That will go a long way to seeing us through until the end of the season and some people can get paid now."

Pompey entered administration last month and were penalised 10-points by the Football League as a result. They have now dropped to the foot of the Championship and are continuing their search for new owners.

There had been a danger that they would not be able to see out the season, although Wednesday's news has appeased those fears.

And now Appleton says his side can concentrate on playing football and beating relegation.

"The money means we can have small things like getting food at the training ground," he added.

"We can use the equipment now and run ourselves like a proper football club at least until the end of the season.

"If you know the basics are going to be there you can concentrate on other areas such as what happens on the playing side of things."

Despite receiving the money, Appleton admitted there may be further player departures as they look to cut costs at Fratton Park.

However, he says administrator Trevor Birch will not allow their best players to leave on the cheap just because they are desperate for money.

Appleton also revealed his side were relishing their underdog status.

"Trevor is talking to clubs all the time but even though he is an administrator and a businessman he is a football person also and whatever deal he does has to be right for the football club," he said.

"There is no pressure on us. No one expects us to get out of trouble, other than our own fans, but we will fight until the end in every one of our last 12 games."