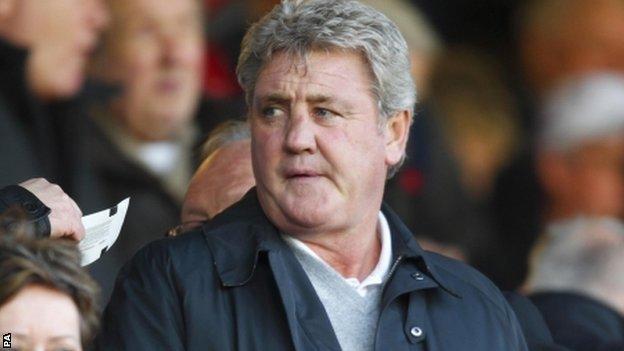 Steve Bruce said Wolves gave him a strong indication that he was going to fill the vacant manager's position before a late change of mind.

The 51-year-old was given a second interview by the Premier League club and believed the deal would be formalised the following morning.

"That was the plan," said Bruce, who eventually missed out to Terry Connor.

"At one stage, I was close, but it wasn't to be. It's their prerogative."

After an initial meeting with chief executive Jez Moxey and owner Steve Morgan, Bruce expected to succeed Mick McCarthy as boss at Molineux.

"I said to my good lady I thought I was back to work. Unfortunately, it didn't happen. I'm disappointed."

Bruce, who has been without a role since he was sacked by Sunderland on 30 November, added that Connor will find the move from assistant to manager a big step.

"When Terry made the first team-talk, he would have realised there's nothing like being number one," continued Bruce.

"As a number two, you don't need to make horrible decisions like leaving players out.

"Being the manager is lonely. When you get beat it's your responsibility. How do you react?

"When you're one of the bottom sides, you lose more than you win. When Monday morning comes you have to forget the defeat.

Connor has so far overseen a 2-2 draw at Newcastle United and a 5-0 defeat to Fulham as Wolves continue to toil near the bottom of the table.