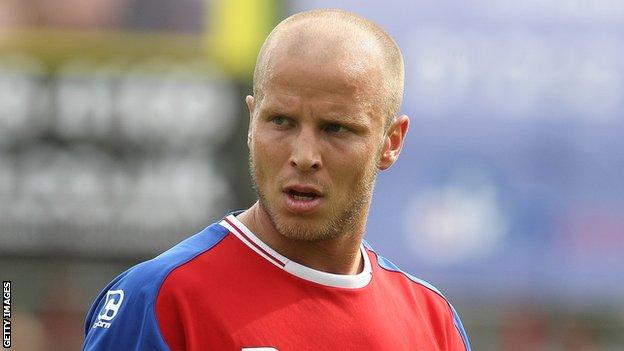 Northampton Town manager Aidy Boothroyd says he will fine midfielder Luke Guttridge if he refuses to play against former club Aldershot on Saturday.

Shots boss Dean Holdsworth said he had an agreement with Guttridge, when he allowed him to leave in January, that he would not face them this season.

Boothroyd told BBC Northampton: "It's nothing to do with Dean if Luke plays or not. I pick the team.

He added: "So that's how it is and he's in contention and will be available if selected tomorrow."

The midfielder, 29, had his Aldershot contract terminated in January and joined the Cobblers a day later.

Earlier in the week, Holdsworth had told BBC Surrey: "When Luke and I shook hands when he left, we had an agreement that whoever he joined, he wouldn't play against us this season.

"In a gentleman's agreement, you hope people stick by it.

"I could have kept Luke here for the rest of the season and have him play a small part.

"Or I could let him go and further his career. He's done that and I'm pleased for him.

"I have been a player and as long as your manager is honest with you, that's all you want.

"All you want back [as a manager] is their honesty and respect."